5 reasons why Bossaball is the ideal sports side event

Throughout the history of our new sport, Bossaball entered numerous mega-events and the court was set up as a sports side event. The organizers of the mega-events, both from the world of sports and music, trusted in the involvement of Bossaball due to the following reasons that make Bossaball an outstanding addition to any mass entertainment project.

Stimulate the project with an innovative sport

The International Volleyball Federation FIVB was looking for a novel sports side event for their presence during the Olympic Games 2016 in Rio de Janeiro, Brazil. The “FIVB Volleyball House” was set up right on the beach of Copacabana and in order to attract the crowds and visitors of the Brazilian capital, the FIVB reached out to Bossaball to be a part of the #VolleyballYourWay movement at the CopaCourts during the Olympic Games 2016. 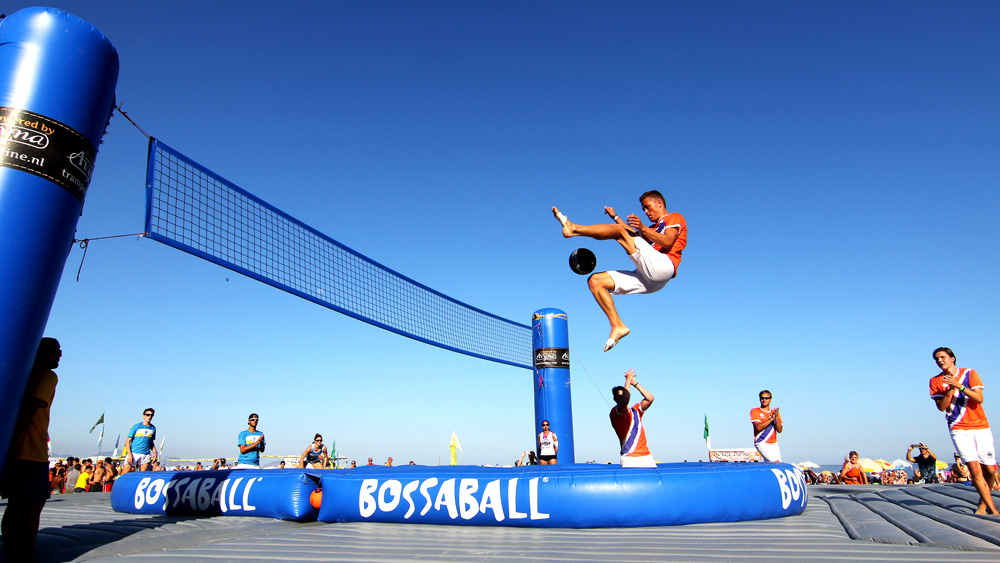 It was not without reason that Bossaball was part of the project, taking into consideration the mission of the “Volleyball Your Way” movement: “To embrace all forms of volleyball and promote the essence of the sports to grassroots worldwide.” Bossaball, being the Brazilian fusion of beach volleyball, footvolley and gymnastics, falls under the umbrella of the mission and vision and the FIVB integrated Bossaball as a novel and attractive sport. For both the FIVB and for Bossaball, this collaboration resulted in documentaries and feature films by the NBC Today Show, Yahoo and the Wall Street Journal, among others.

Present an attractive and participative activity to festival-goers

The two major Belgian music festivals Pukkelpop and Tomorrowland offered Bossaball to their festival-goers as a sports side event on their campsites. The festivals were looking for an attractive and spectacular activity, while at the same time they wanted their visitors to participate in the game. Bossaball offers just this combination of a guided activity and thrilling demonstration matches.

In 2015, the Pukkelpop campsites were the stages of Bossaball show matches between teams from Belgium and the Netherlands, which had come to exhibit the sport. More than 700 people participated and more than 25 demonstration matches were held. In 2016, Bossaball was part of the sensational and complex scenography of the DreamVille stage during the eleventh version of Tomorrowland. The Bossaball demo teams used the event for their Olympic preparation, since the demonstrations took place just before the international tournament on the Copacabana during the 2016 Olympic Games in Rio de Janeiro.

Pitch Bossaball as a sports side event to sponsors

The organizing agency of the FIVB Beach Volleyball World Championships 2017, ACTS Sportveranstaltungen GmbH, collaborated with Bossaball in order to offer a unique sports side event during the mega-event in Vienna, Austria. The organizers subsequently marketed and benefited from the cooperation and lined up an official sponsorship between Austrian Airlines and Bossaball and the international exhibition tournament #ViennaCalling, with teams from the Netherlands, Belgium and Colombia, was held on the Danube Island.

Austrian Airlines became yet another brand that found in Bossaball an ideal partner to sponsor a sports side event and impact in both an attractive and participative way. The airline brand activation was repeated the following year for the 2018 Beach Major Vienna. Offer a mix of music & sports with the samba referees

On the 28th of July 2012, Bossaball was part of an Adidas event in Germany. The Adidas Group, one of the global leaders in the sporting goods industry, invited the game of Bossaball to the headquarters in Herzogenaurach in view of the Adidas Olympic Day 2012, a themed sports festival organized to celebrate the Olympic Games 2012 in London. Here, Bossaball was greeted by several thousands of employees and their families. After a professional practice week in Belgium, a 12-headed selection of worldwide Bossaball players took off to Germany to showcase the game. Several clinics and demonstrations were given and performed, accompanied by the professional samba referees to create the right atmosphere.

Included as a sports side event, Bossaball and its samba referees, with the help of a whistle, a microphone, percussion instruments and an exotic DJ set, took participants and the crowds to a higher level at the Adidas Olympic Day 2012. With the music flowing and the dynamic court encouraging adventurous moves, the referees got everybody’s hips moving!

At the All Olympic Day of adidas, Bossaball was also discovered by two secret sports agents who were looking for a new sport that unites everything from Brazil. Check it out in the video below:

Go viral with Bossaball as a sports side event

Facebook pages such as Dreamteam, Unilad and Red Bull have put together video compilations in order to provide their followers with fresh and thrilling footage. Only in 2016, this resulted in more than 150 million views of Bossaball material. Footage of above mentioned events, such as the matches on Pukkelpop and Tomorrowland and the international tournament #ViennaCalling during the FIVB Beach Volleyball World Championships in Austria, was chosen by the media platforms and reached new heights with some videos achieving more than 500.000 shares.

Adding Bossaball as a sports side event results in added reach for the organizers and ensures great interaction on social media. The participants and spectators will take their unique Bossaball footage to the different social media platforms and enhance Bossaball’s event partners’ impressions.