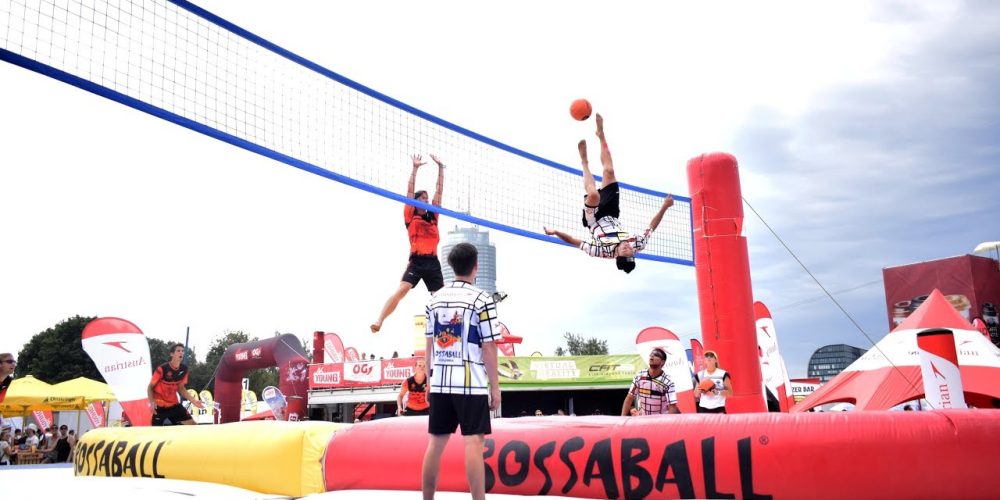 In our search to intertwine art with sport, we came across a concept like Bossaball. This discipline gets the best of both art and sport by displaying sports dynamics alongside exotic melodies.

As usual, it is under discussion, whether sport is considered as an art form or not. In any case, the question arises whether, to some extent, there is a connection between sport and art. The latter is the expression of human creative ability and imagination. Sport, on the other hand, is seen as an activity involving physical exertion and skill in which one individual or team competes against another or others.

Bossaball is a ball game between two teams, combining elements of volleyball, soccer, gymnastics, and capoeira. It is played on an inflatable court with a trampoline
on each side of the net.

The change in gravity, combined with the safety provided by the inflatable surface, allows for a whole new range of techniques, tactics and team strategies. Bossaball allows players to hit the ball at unseen heights with any part of their body. The result is amazing aerial kicks, dramatic dives and masterful control.

However, there is no doubt that many sports disciplines involve skills, creativity and imagination, and their expressions and movements are appreciated as a perfect art. The New York Times states that Pierre de Coubertin, founder of the modern Olympic Games, believed that sport and the arts were inextricably linked. Between 1912 and 1948, medals were awarded to painters, sculptors, architects, writers, and musicians, who participated in the Olympic Games showing that the worlds of sport and art are not so different.

In 2017 the promotional elements for the Beach Volleyball World Championships in Austria were completely personalized. Vienna’s urban landscapes, imperial palaces and its legacy in classical music were reflected in the event’s poster, dedicated to the legendary native singer Falco. 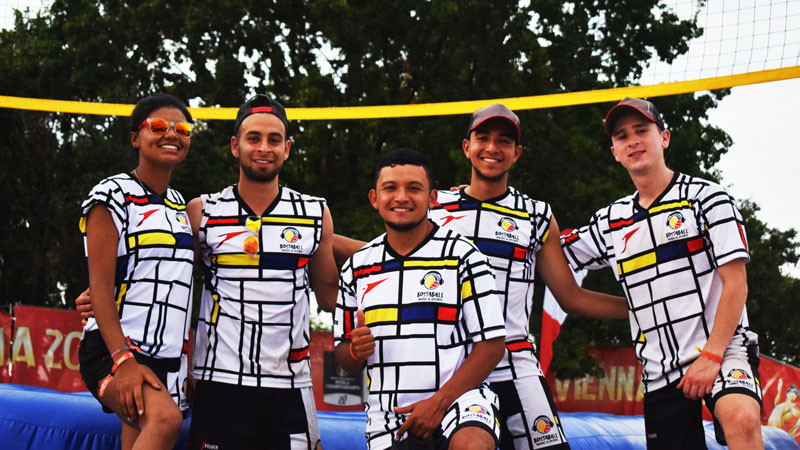 In honor of Piet Mondrian and the centenary of the De Stijl art movement, a Bossaball court inspired by the Dutch artist was created. Mondrian was one of the best known artists involved in this international art movement and his abstract paintings, with their planes of primary colors and black lines on a white background, quickly became world famous and a guiding light for the movement. His fundamental design was projected into the Bossaball court layout and the Vienna Calling exhibition cup was played on a giant Mondrian-inspired creation.

BOSSABALL COMES HOME FOR THE 2016 OLYMPICS

Exactly 20 years after the first inspiration of the fusion of music and sports, the International Volleyball Federation approached Bossaball to be part of the #VolleyballYourWay movement at the FIVB CopaCourts. An opportunity to interact with new fans during the Games 2016 Olympics in Rio de Janeiro, right in the panoramic Copacabana… Bossaball came home! Five national teams participated in the #AtTheCopa tournament. The accessory was reminiscent of the various vibes on Brazil’s most famous beach, where colorful melodies meet recreational activities.

Bossaball Sports SL assigns licenses for exclusive collaboration, representation and development in a given territory. By combining the design of the Bossaball logo with the characteristic objects of the contracting country and region, the Christ the Redeemer of Rio de Janeiro, the Tango of Argentina or the iconic dutch windmills and tulips, each exclusive member gets a custom logo signifying inclusion in the international.

Over the years Bossaball Sports SL has developed different projects and tools to facilitate the work of various partners and enrich the Bossaball experience. Each collaboration is totally personalized, meeting the specific needs of the place, using the latest technology new, respecting the environment and offering a different approach to local culture through art, design and architecture.

View all posts by Filip Eyckmans →