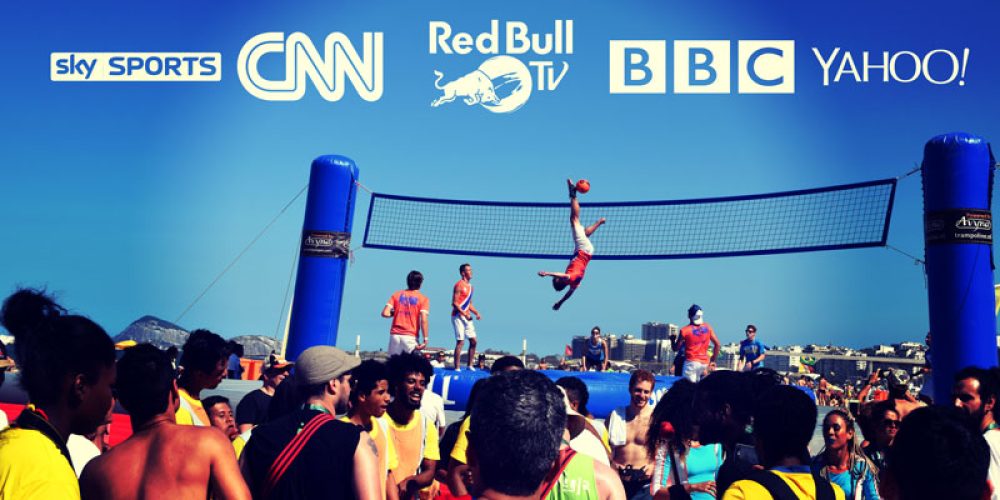 Bossaball, the new sport that brings football, volleyball and gymnastics together on an inflatable court, has received wide interest from global media platforms such as Red Bull TV, CNN, BBC World News and Yahoo. Through these collaborations, international tournaments, such as during the Olympic Games 2016 in Rio de Janeiro or in sun-kissed Southern Spain, were professionally covered and broadcasted. Not to mention the fact when Bossaball was declared an official school sport in Bogota, Colombia and CNN – Great Big Story brought in a team to relate about this Bossaball milestone.

Red Bull TV features the “A decade in the air”-Cup

In April 2015, Bossaball celebrated its 10th anniversary by setting up a two-day tournament in Malaga, Spain. Red Bull TV sent a four-person film team to cover what turned out to be Bossaball’s high point of its first decade.

The international tournament – fittingly titled as the “A decade in the air”-Cup – saw Belgium, the Netherlands, Argentina and the hosts from Spain competing for being the best team of Bossaball’s history. Red Bull TV followed the preparations at the Bossafarm and the striking two-day tournament, which took the teams from snowy mountain tops in the Sierra Nevada to Malaga’s recently inaugurated state-of-the-art port.

The first piece of the documentary, where Bossaball is part of a sports-featuring series named “Games of Strange”, was broadcasted in November 2016. Tune in and find out how the team from Bossaball Belgium, undefeated throughout the tournament, takes away the title and crowns themselves as the best team of Bossaball’s first decade, beating the promising team from Argentina in a fantastic and suspenseful final.

“Great Big Story” is CNN’s own viral video network. It aims to create video that is appealing to millennials,  shareable on social networks, and appropriate for native advertising. On August 12th 2016, Bossaball was featured on Great Big Story, being presented as “An Obscure Sport with a Samba Twist”. Besides generally featuring the sport, the documentary shows Bossaball’s impact on a community in Bogotá, Colombia. There, the new school sport is part of the government-funded program “Jornada Completa” for at-risk youth.

Great Big Story highlighted that “Bossaball definitely knows how to party, and although the sport is relatively new, it is taking off in countries like Brazil, Singapore, Spain and the Netherlands. In Colombia, it’s even helping kids stay off the streets and away from violence.”

Bossaball at the Olympic Games 2016

Yahoo en español covered our international tournament #AtTheCopa during the Olympic Games 2016 in Rio de Janeiro, Brazil – the country where the sport has its origins.

At the Olympic Games in Rio, gymnastics and volleyball were among the most popular sports and, due to its Brazilian flair and the location, beach volleyball was the signature event on the Copacabana. Large crowds gathered though, when the International Volleyball Federation (FIVB) brought Bossaball to town! Our sport was a feature of the FIVB’s CopaCourts, part of the newly set up project #VolleyballYourWay, by which the federation aims to support all different forms of volleyball.

With an international tournament taking place, the world’s top teams exhibited the fusion of volleyball, gymnastics, football and capoeira played out on a giant inflatable court against the backdrop of a samba playing band. A Spanish-speaking film team from Yahoo was right there and covered the unique spectacle on the scenic Copacabana!

When Bossaball was at the Olympic Games 2016 in Rio de Janeiro, the sport and its exhibition cup were widely covered by the international media. For the Vienna Calling Cup, a film team of Turkish TV Channel TRT World covered the second weekend of the Bossaball tournament during the Beach World Champs 2017 and sheds light on the sport’s recent past and future plans. Undoubtedly the sponsor of the event, Austrian Airlines was able to extend its reach and impact by the fact that Bossaball Sports SL brought in an international TV channel to cover the activities on the Danube Island.

The Travel Show, a BBC program that is being broadcasted globally to an audience of more than 71 million viewers weekly, came to Southern Spain and shot a documentary about bossaball and its headquarter – the Bossafarm!

On Saturday, the 6th of February, an international demonstration team performed in an exhibition, held at the new fairgrounds of Estepona. A place that added an Andalusian flair to the shootings, for which players from Belgium, the Netherlands, Argentina, and Spain were flown in.

The film crew had the chance to make different shots of the exhibition and of the Bossafarm, furthermore interviewed Filip Eyckmans, Bossaball’s creator, and some players. Even the BBC presenter Christa Clarwood gave it a try and had her first Bossaball experience. On the 27th of February, the documentary was broadcasted worldwide. 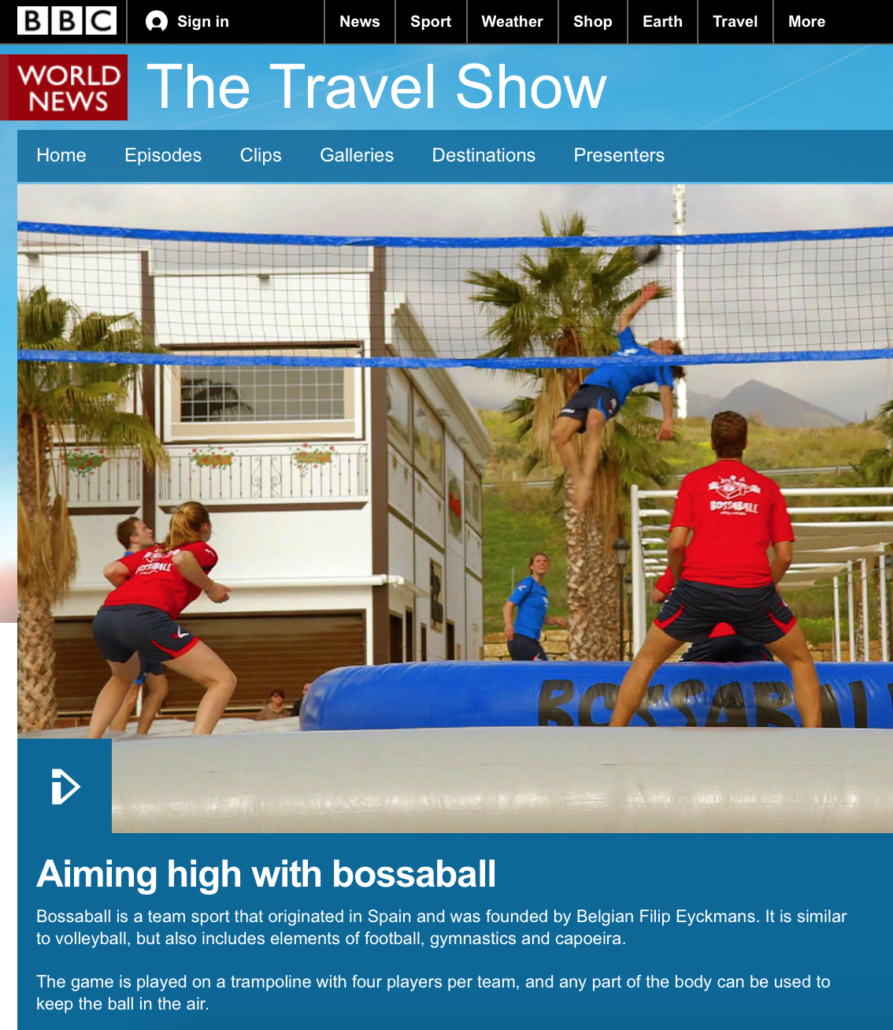 Mike Bushell, presenter of Britain’s most watched, award-winning morning news program, dropped by the home of Bossaball Netherlands: the SportBox.

The Dutch team, winner of the tournament carried out on Rio’s Copacabana during the Olympic Games 2016, received the presenter with a full-on introduction into our new sport, one of the unexpected hits of the Olympics – as the BBC puts it. This report got shot at the Sportbox, a hangar in Utrecht, Netherlands, that was transformed into a multi sports indoor location and that houses a fix Bossaball court.

The short documentary featured the first exclusive bossaball footage from the FIVB #CopaCourts, where the world’s top teams exhibited the fusion of volleyball, gymnastics, football and capoeira.

Dan Magness of Sky Sports UK specifically traveled to the Netherlands for a demonstration between The Beach Boys and the Netherlands. The Dutch team had recently become Bossaball world champion. Dan Magness is a UK TV presenter who started out as a football freestyler, performing phenomenal football tricks at events across the world. Bossaball is being played in more and more countries and via this feature has now attracted attention as well in England.

Mediacorp Channel 5 is an English general news and entertainment television channel in Singapore. In Episode 7 of “Action Sports”, the channel got some insight on bossaball when they visited our partners in Singapore.

Faizal Rahman, a Singapore-based actor, was sent out to give it a try on the bossaball court. He received a full introduction to our sport, starting from scratch and teaching him all the basics until a match, where he joins the experienced players on the court. Furthermore, sports scientific tests were conducted on the players – with rather astonishing results.