“Music and sports are natural complements to one another the way suits and ties are to Justin Timberlake”, says Nielsen.com. The aim of bossaball has always been to mix music and sports to get the best out of those two disciplines. Have a look at the following examples of sportsmen and musicians that were inspired by the other side: sportsmen playing music and musicians doing sport. For them, both music and sports were essential in their lives. Many people are surprised to hear Bob Marley was a fanatic soccer player and fan. That doesn’t seem to fit their image of world’s most legendary reggae star: the marihuana smoking, the lazy reggae beats, the dreadlock rastafari easy going attitude, the political activism, …

“Football is a whole skill to itself. A whole world. A whole universe to itself. Me love it because you have to be skilful to play it! Freedom! Football is freedom.” (Bob Marley – 1979)”

Bob Marley simply loved kicking a ball. About every single day when on tour or in the recording studio. He also loved watching soccer on tv. His favourite team was Santos Futebol Clube ( Brazil ). His favourite player was Edson Arantes do Nascimento, world famous as Pele, who began playing for Santos at age 15.

On a trip to Brazil ( Rio de Janeiro, 1970 ) Bob Marley joined in on a heated street soccer game with some fellow musicians, people from record label Ariola, Brazilian street kids and Paulo Cesar, member of the 1970 Brazilian World Cup team. Before the game the Brazilians had given him a number 10 Santos shirt (Pele’s number). Bob Marley had smiled, and, while putting it on, was heard saying that, just like Pele, he too could play in all positions.

Samba and Soccer: Ronaldinho and Robinho During the past few years various international superstar Brazilian soccer players have repeatedly mentioned their love for samba and bossa nova music.

They have rhythm, percussion and dancing skills, and they’re showing off whenever they can. Football audiences worldwide love to see their heroes swinging to the music, enjoying life the Brazilian way, playing soccer with a smile on their face. Having a ball. 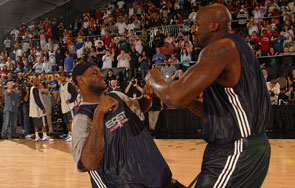 Long before his successful career in the music industry, the legendary mellow, smooth, romantic Spanish crooner Julio Iglesias was, while attending law school in Madrid in the early sixties, for a short period goalkeeper for the Real Madrid soccer team.

In 1963, his career as a football athlete was cut short after a car accident. Iglesias started playing the guitar soon after he had been hospitalised. Still recovering from his injuries a nurse gave him a guitar, and Julio Iglesias began writing songs.

“I had a car accident, very, very strong car accident,” remembers Iglesias. “I had what they call paraparexia, which is not a paraplegic. It’s a compression in the cord, in the sense of the neck … my spinal cord, and I was very, very ill for three years.”

“Doctors thought that I would never walk again. But slowly, I started to recover. And to increase dexterity in my hands, I began to play the guitar.” 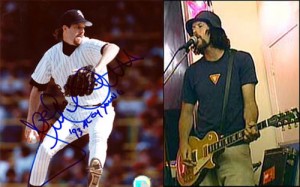 During his 11 year professional baseball career he recorded 5 albums, and managed to plan shows in baseball off-season. McDowell toured with The Smithereens (with support act V.I.E.W) and he’s a ( party ) buddy of Pearl Jam’s singer Eddie Vedder.

Since 1992 “Black Jack” has been the frontman of Stickfigure, a power pop rock ‘n’ roll band, named after his wiry, long and lanky perfect pitcher’s stickman bodyframe ( 6-foot-5-inch, 180-pound ). Growing up in Vega Alta ( Puerto Rico ) Bernie, a very devoted classical guitar student, wanted to become a professional musician. As a young man, growing into a naturally athletic body, Williams shared his free time between playing baseball and studying music. As his baseball playing skills developed Bernie was forced to choose between music and sports.

Soon he became a pro baseball player (switch hitter for the New York Yankees (1991-2006)), but he never stopped playing and studying music. Nowadays Williams is a critically-acclaimed jazz recording artist. 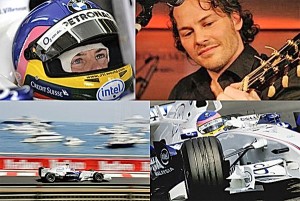 The single “Accepterais-tu ?”, in which he asks his loved one to marry him, written in Canadian French, is one of 4 songs in French, the other 9 tracks are in English. Villeneuve co-wrote one song with his sister Melanie. A song about their dad, Formula One driver Gilles Villeneuve. He died in a 140 mph crash in the final lap of the 1982 Belgian Grand Prix, when Jacques was eleven years old.

Jacques Villeneuve bought his first guitar and started writing songs in 1996, at the beginning of his Formula One career. During the late 1990s Villeneuve was engaged to Australian singer Dannii Minogue. She stimulated his desire to express himself through music.

I am stupidly passionate about music, it has become a bit of a drug. I buy tons of CD’s. It makes my wife crazy, but you know it’s cheaper than buying watches or stuff like that! 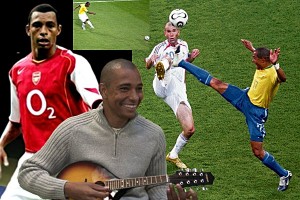 Silva spends a lot of his spare time studying the cavaquinho, which is a 4-string small mandoline / guitar (that looks pretty much like a ukelele).

When he moved to the United Kingdom, at the beginning of his career for Arsenal FC (2002), he started attending mandoline classes.

“I can just about manage one or two things on the mandolin. I’m advancing very slowly, but just about ok.” 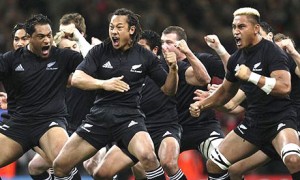 A haka is a tribal dance in Maori culture ( New Zealand natives ). Hakas traditionally have various uses in everyday Maori life. They are used to tell a story, to express emotions and opinions, but are best known in their most aggressive form: The Ka Mate War Dance.

Warriors used the Ka Mate to prepare for a battle. To focus their strength. To proclaim their powers, To celebrate the triumph of life over death, but mostly to challenge and intimidate the opponent. 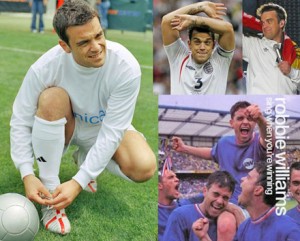 Brit Award winning pop singer-songwriter Robert Peter Williams ( Take That, Robbie Williams ) is a soccer freak. He is a supporter of League One Port Vale Football Club in Stoke-on-Trent, his hometown in the United Kingdom.

Williams is a football investor / shareholder (£240,000 in Port Vale FC ). “I’ve been a Port Vale fan all my life. When I was younger I was in the Railway Paddock and I used to dream about sitting in the chairman’s box.”

“Although I can’t be at the Vale often, my investment is just to say that my heart is still there and I’m a huge supporter. I’m really excited about what we may be able to do with the club in the future.” 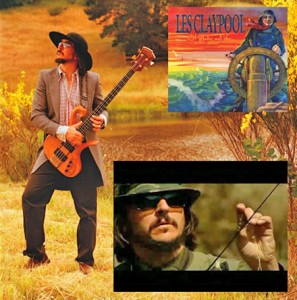 When I was growing up we didn’t have any money. I come from a long line of auto mechanics and what we did on weekends was that if I wasn’t digging or something with my dad or fixing some deck or remodeling a bathroom or whatever, we were out floating around in San Pablo Bay trying to catch sturgeon or we were out in the ocean, salmon fishing. Every year we would take camping vacations in the same spot. What do you do when you camp? A lot of fishing.

ESPN.com gives us more examples of music and sports.