Bossaball, due to its Brazilian roots oftentimes being seen as a beach sport, is taking over the indoor spaces in the Netherlands and in Belgium. The indoor sport halls, commonplace meeting points to do sports in Northern Europe, give space to an evolving indoor league between Belgian and Dutch teams and have hosted various National and European Championships.

Over the last years, bossaball has been installed on a large variety of sites, showing its adaptability and flexibility through its easy set up. In like manner, this counts for the indoor spaces in Northwestern Europe. The indoor league had its first edition in 2014/15 and is celebrating its third edition in 2016/17. Each month, around 20 teams meet up in a different sport facility in order to compete and fine-tune their bossaball skills.

The competition is split up into two leagues: In the A-League, the four best teams from the Netherlands and Belgium fight for the league title. This competition is complemented by two teams from the B-League. Here other Dutch and Belgian teams challenge each other and improve their volleyball, soccer and gymnastic skills on the court. The teams that come in 1st and 2nd will compete in the A-League at the next venue. Check the dates and read more about the indoor league on the homepage of Bossaball Netherlands.

Not only the permanent indoor league keeps the bossaball players on the move. Over the last years, various European Championships were hosted in Dutch sport halls. Furthermore, the Belgian Open 2015 and 2016 and the Flanders Open 2016 were opportunities for the players to measure each other and find out who the best local teams were in the Netherlands and Belgium, the two dominating countries in the history of bossaball. The Belgian Open 2016, for instance, was carried out on four courts! This setup gave space for 150 players and 27 teams to participate in this Open Indoor Championship. 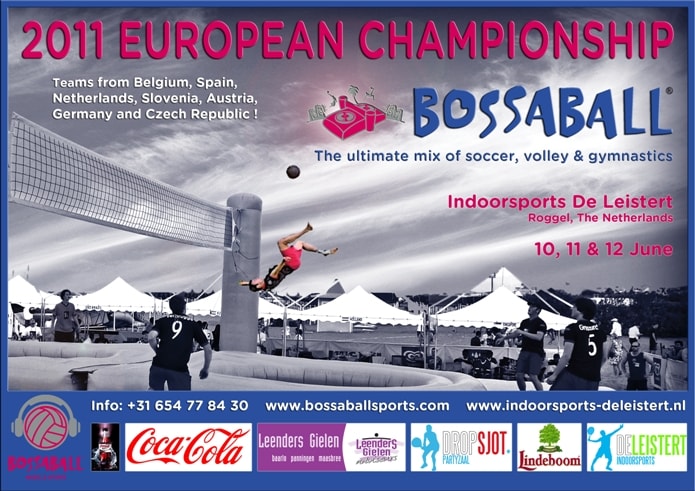