The International Volleyball Federation FIVB and the Dutch Volleyball Federation NeVoBo organized a truly unique tournament that was held in four host cities. From the 26th of June until the 5th of July the Beach Volleyball World Championships took place in the Netherlands at the following beautiful venues: Den Haag (Hofvijver), Amsterdam (de Dam), Rotterdam (ss Rotterdam) and Apeldoorn (Marktplein). Beside the battle for the world titles, ample events were organized in all four host cities of the World Championships, one of them being bossaball!

The FIVB announced bossaball’s presence on their homepage and Twitter, promising the visitors the chance to experience bossaball during the ten days of the tournament. 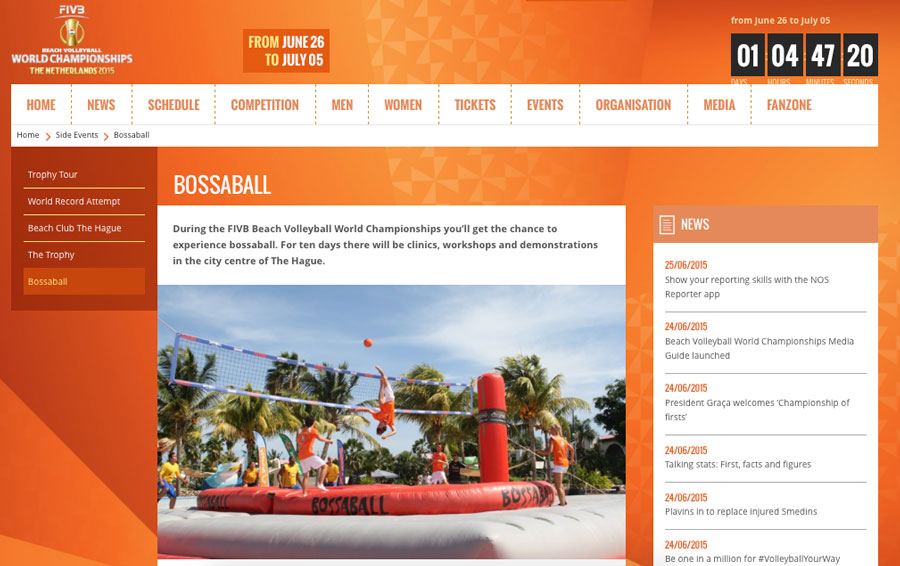 Bossaball Netherlands was present at all four cities during the 10 days of the World Championship. Its main stage though was in the city of The Hague, where the bossaball court was set up on the public square Spuiplein, not far away from the Center Court of the Beach Volleyball tournament and right in the heart of the Warm Up Area of the competing athletes. Here demonstrations took place, clinics and team building events for companies were carried out, and everyone of the 110.000 visitors that attended the World Champs was invited to come by, try out and experience bossaball with players from the Netherlands, Spain and Argentina. On the 5th of July, the day of the finals, not only the new Beach Volleyball World Champions were crowned, but as well the Dutch Bossaball Championships were held.

Many prominent people participated in and were present at the announcement of the new world record including FIVB President Dr. Ary S. Graca F°, Hans Nieukerke (president of Nevobo), Michel Everaert (president of sport Nevobo), Rabin Baldewsingh (alderman of sport The Hague) and Bas van de Goor (FIVB Beach volleyball World Championships tournament director). The World Record was sponsored by Cheaptickets.nl, one of the biggest web shops for flight tickets in the Netherlands.

The bossaball court was located right next to Scheveningen’s promenade, a spot where journalists, bloggers and social media experts dropped by and captured the bossaball action – shots that were loved by sports fans around the world.

The FIVB published a video suggesting a bossaball rally as the rally of the weekend and asking its followers, if they would like to try our mix of volleyball, football and gymnastics. Well, the fans seemed to like the idea – the video had around 290.000 views, more than 4.000 likes and around 3.000 shares.

USA Volleyball published a picture of the bossaball court on Scheveningen’s beach on their Instagram account, amazed by the high jumps and backflips of our players! Their fans loved it, what resulted in 11.000 likes.

An inflatable volleyball court! They call it bossaball here in #holland and the center has trampolines! Amazing how high they can jump and the sick flips they do!

USA Volleyball social media’s representatives undoubtedly liked our sport and they showed up the day after the World Record, when the bossaball court had returned to Spuiplein in The Hague. Three videos were uploaded to their Instagram account, challenging the followers to choose their favorite bossaball serve of a match between Bossaball Netherlands and Bossaball Spain. More than 7.000 likes – it seems that USA’s volleyball aficionados are anxiously waiting for bossaball to come to North America.

48 teams per gender entered the FIVB Beach Volleyball Swatch World Championships, while the winners of the event qualified directly for the 2016 Summer Olympics in Rio de Janeiro, Brazil. It’s hard to know if it were the upcoming Olympic Games or bossaball’s vibes that drove the Brazilian athletes to absolutely dominate the World Championships, taking away 5 of the 6 medals and winning both competitions. Bárbara Seixas and Ágatha Bednarczuk beat Taiana Lima and Fernanda Alves in an all Brazilian Women’s final in two sets. In the Men’s final Alison Cerutti and Bruno Schmidt from Brazil defeated the local favorites Reinder Nummerdor and Christiaan Varenhorst in three sets.

Where: Netherlands, The Hague 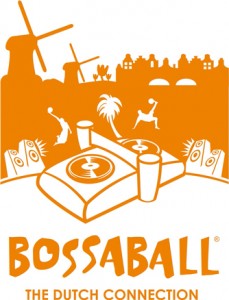