The FIVB takes Bossaball to the Olympic Games 2016 in Rio

Back in 1996, we were working in the music business and one of our bands – dEUS – was invited by Brazilian band Chico Science & Nação Zumbi, who were organizing the Abril Pro Rock in Recife. The days before and after the festival we spent time in Chico’s house in Olinda, where we were captivated by the real street capoeira, the foot volley and the preparations for carnival. No doubt, this week was the main inspiration of our fusion of music and sports.

Exactly 20 years later we were contacted by the FIVB, who reached out to different organizations, including Bossaball International, to be a part of the #VolleyballYourWay movement at the FIVB’s CopaCourts as an opportunity to engage with new fans during the Olympics Games 2016 in Rio De Janeiro, right at the panoramic Copacabana…bossaball came home! Five national teams participated in the tournament #AtTheCopa: Colombia, Brazil, Belgium who got the bronze medal, Argentina silver and the Netherlands, who took home the gold medal. On their homepage, the FIVB states: “Large crowds gathered on the FIVB’s CopaCourts to see the fusion of volleyball, gymnastics, football and capoeira played out on a giant inflatable court against the backdrop of a samba playing band. The unique spectacle highlighted volleyball’s position as a fun, entertaining and universal sport. Bossaball will be a feature of the FIVB’s CopaCourts for the next days with an international tournament taking place with the world’s top teams.”…and… “Beach volleyball has been the signature Copacabana event so far but this was rivalled today when the FIVB brought Bossaball to town.“ 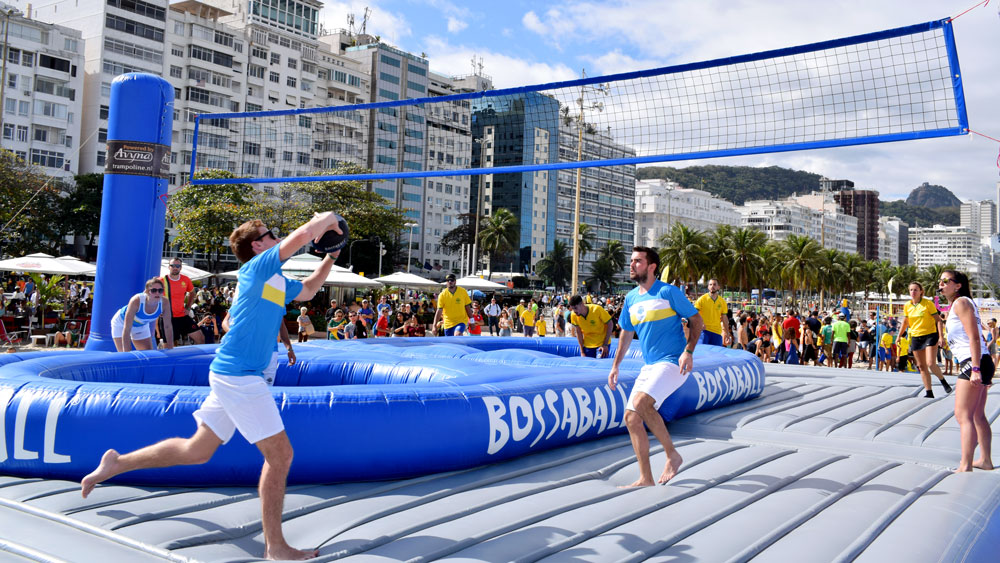 Also professional Volleyball players tried it out: “The Volleyball House and CopaCourts reached dizzy new heights today when Bossaball took over Copacabana Beach and wowed the crowds with high flying volleyball skills which would have impressed Volleyball House attendee Mireya Luis who was known for her spectacular jumping power during her volleyball playing days. Bossaball players from around the world grabbed the attention of beach goers with impressive acrobatic skills that Mireya would have been proud of.”

Later in the week the national female volleyball team of Argentina joined in for a clinic and The Today Show’s Al Roker, Natalie Morales, Billy Bush and Access Hollywood host Kit Hoover decided to give it a go one afternoon, only to find out that the pros make it look really easy. The Wall Street Journal added: “At the Olympic Games in Rio, gymnastics and volleyball are among the most popular sports. But what if they were combined and played on a huge inflatable, bouncy-house-style court?”

Over 20 TV stations worldwide covered the event, resulting in a social media hype with over 100.000.000 views in just a few weeks. At the end, the homecoming of our sport was inspired by the Brazilian people, how they dance, how they play sport and due to RIO 2016 it is bringing today new opportunities in its second decade towards new horizons.