Bossaball at the FIVB Beach Volleyball World Championships 2017 were 10 days of action under the Viennese summer sun, which entailed clinics for all the Austrian beach volleyball fans and two Bossaball tournaments with the teams from Colombia, Belgium and the dominant line-up from the Netherlands. Two Bossaball courts had found its spot right next to the especially set up stadium on the Danube Island – an amphitheater for 10,000 beach volleyball fanatics.

After the A decade in the Air Cup in 2015, At the Copa during the Olympic Games 2016, now for the third year in a row, there has been an international Bossaball tournament. This year went under the slogan of Vienna Calling. During the 10 days, two tournaments were set up on the two weekends. After having won on the Copacabana during the Olympic Games, once again, the team from the Netherlands went on to win the competitions on both weekends. Leaving behind the teams from Belgium and Colombia, who both came in second once on respective weekends. Have a look at some pictures of the Dutchmen, who defended better and spiked harder, and the other teams, flying over the Danube Island. 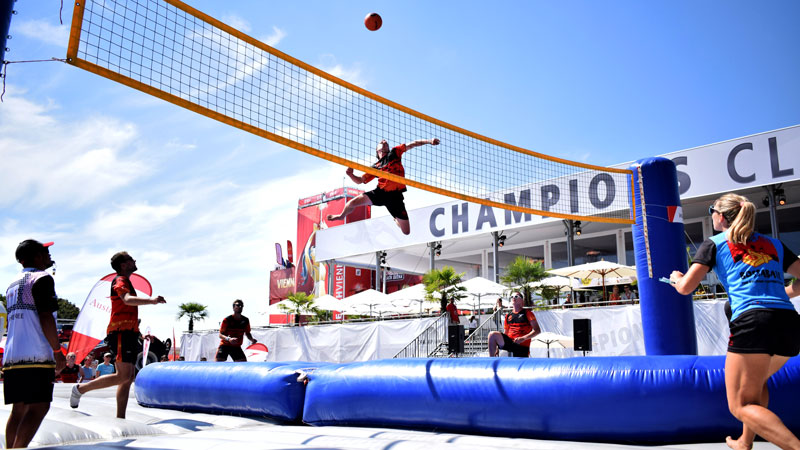 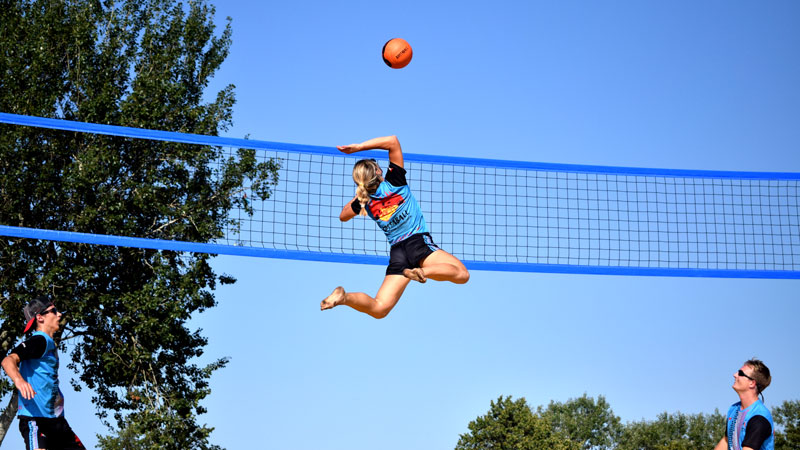 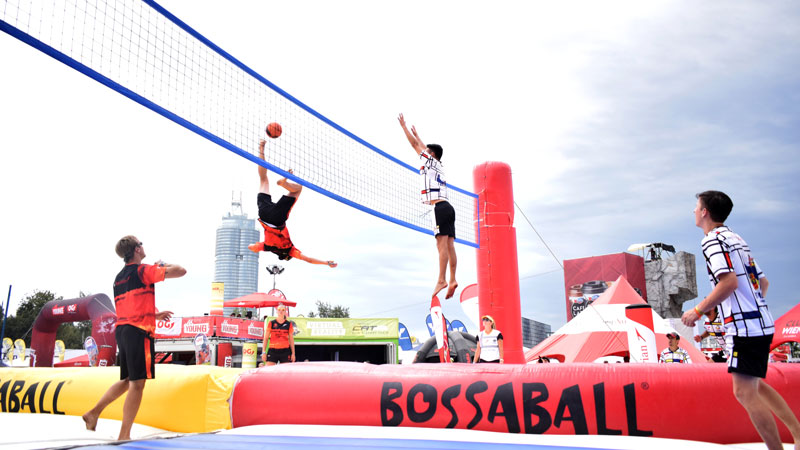 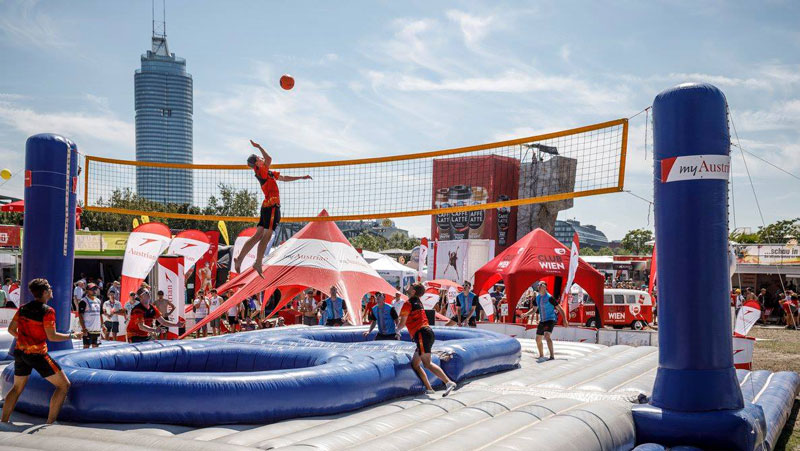 Taking into consideration Bossaball’s music and sports background, what would’ve been more fitting now, than naming the event by the hit of legendary Austrian legendary singer Falco: Vienna Calling – the first major Bossaball event on Austrian soil was about to happen.

Vienna is known for its baroque streetscapes and imperial palaces that set the stage for Vienna’s artistic and musical masterpieces. With a musical heritage that includes composers Wolfgang Amadeus Mozart, Josef Haydn, Ludwig van Beethoven, Franz Schubert, Johann Strauss (father and son), Johannes Brahms and Gustav Mahler, among countless others, Vienna is known as the City of Music. Integrating this Vienna vibe into the Bossaball event poster was therefore more than compelling.

Their sound might not go along the likes of Mozart and Beethoven, but the samba referees, essential part of the Bossaball vibes and show, were putting on their best during the matches of Vienna Calling. The Garcia Brothers from Arriate, Spain, found their stage right in front of the VIP area and took both players and spectators to a higher level. 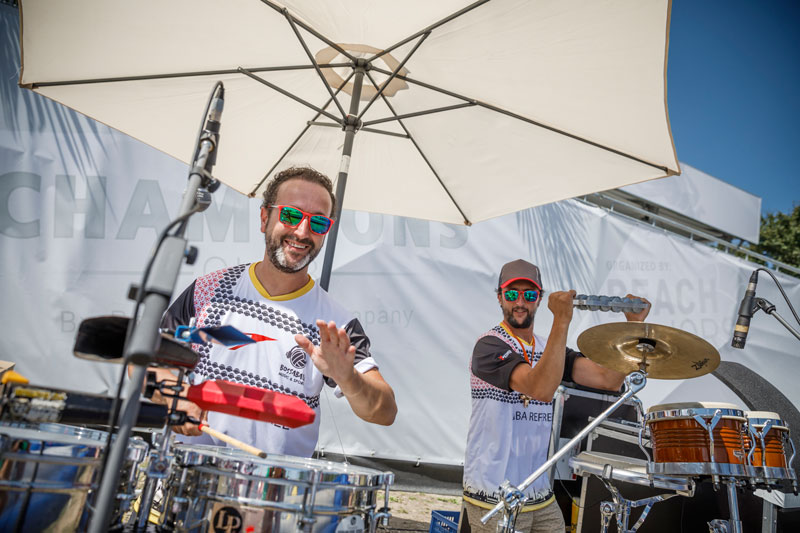 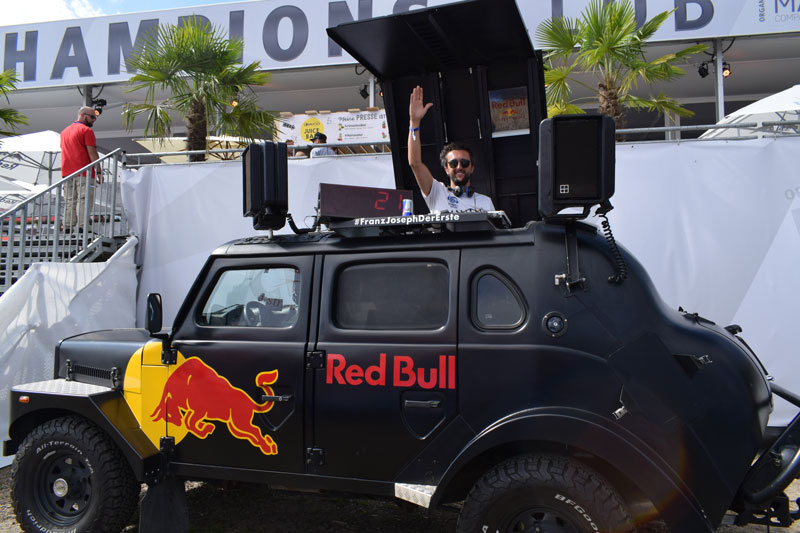 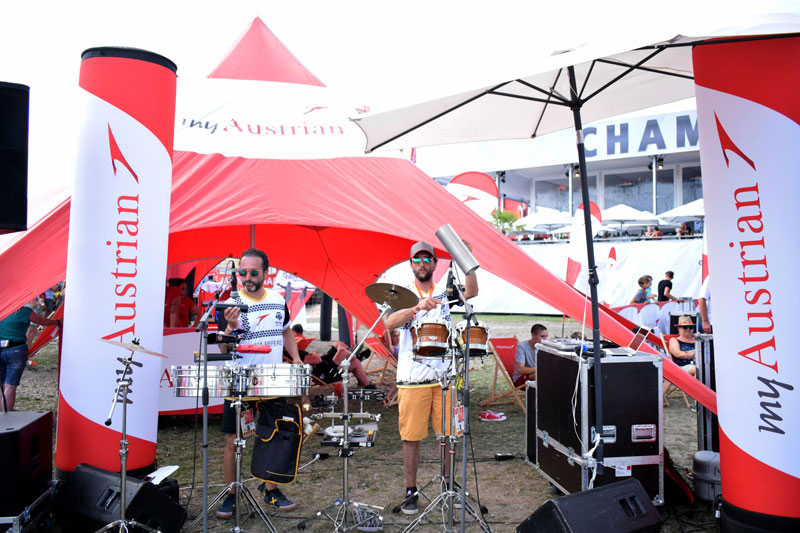 Not enough of arts during Vienna Calling though. In honour of Piet Mondrian, a Dutch modern artist, and the 100th anniversary of the arts movement De Stijl, a Bossaball court inspired by Mondrian was created. Piet Mondrian is among the best-known artists involved in this international art movement and his abstract paintings, with their primary colour planes and black lines on a white ground, quickly became world-famous and a guiding light for the movement. On top of that, as well the shirts of the Colombian team recalled the style of the Dutch painter. The Bossaball court, the event poster and the team shirts were designed in collaboration with Spanish designer Miguel Retamero. When Bossaball was at the Olympic Games 2016 in Rio de Janeiro, the sport and its exhibition cup were widely covered by the international media. For the Vienna Calling Cup, a film team of Turkish TV Channel TRT World covered the second weekend of the Bossaball tournament during the Beach World Champs 2017 and sheds light on the sport’s recent past and future plans:

#WorldChampsVienna on the Danube Island

Although the country is not on the seaside, beach volleyball has a massive support in the Austrian sports panorama. This is mainly due to the long history of the tournaments in Klagenfurt. A city, which hosted the FIVB Beach Volleyball World Championships in 2001 and since then has been a Grand Slam tournament, officially being part of the Swatch Beach Volleyball Major Series. The organizing agency of the Major Series, ACTS Sportveranstaltungen GmbH, which collaborated with Bossaball Sports SL for the event, decided to take the World Champs 2017 to the Austrian capital. Having a look at the following stats, they most certainly made a wise decision: 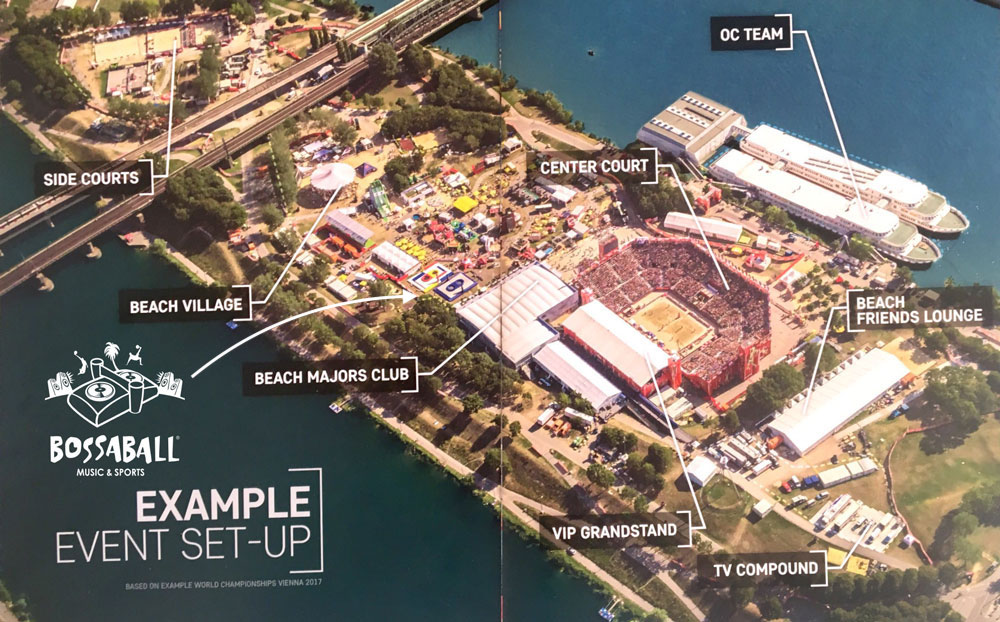 Bossaball location on the Danube Island in 2017

Furthermore, the beach volleyball hype in the last decades is due to the success of various male players. Two of them, Clemens Doppler and Alexander Horst, joined forces for most certainly their last big championships, both entering the World Champs at age 36. In stunning manner, the Austrian couple surged through the stages and, elevated by the Austrian supporters, even reached the final. In a close match against Brazilian couple Andre Loyola Stein and Evandro Gonçalves Oliveira Junior, they took home silver medals, losing 23-21 / 22-20.

It was as well the Austrian beach volleyball stars who kicked off the FIVB Beach Volleyball World Championships in imperial style. At a press conference held at the city’s iconic Spanish Riding School, they served it up to Vienna’s famous Lipizzaner horses. 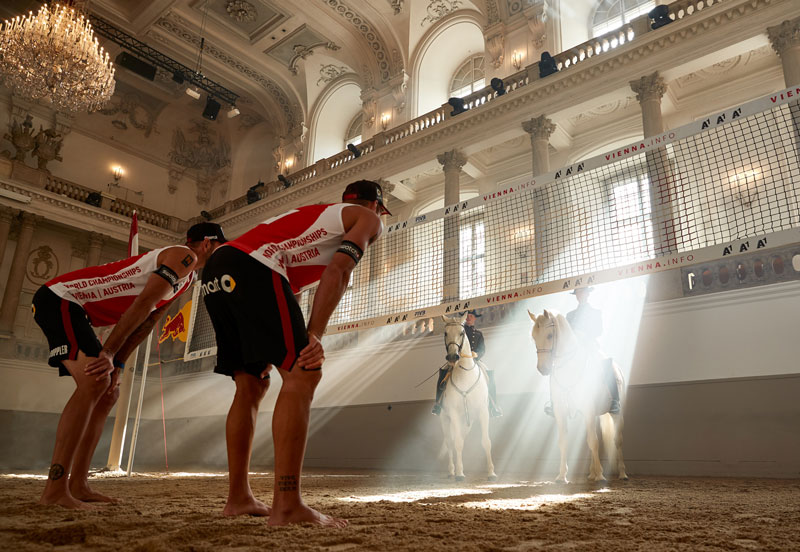 Austrian Airlines – a charming way to fly on the Bossaball court

The Bossaball activities did not only entail tournaments with the professional players, as well workshops for all the Austrian beach volleyball fans were offered in the Vienna summer sun. Bossaball had found Austrian Airlines as a sponsor for the event and throughout the 10 days, more than 2,000 participants signed up for a prize draw for two flights to Los Angeles. All of those 2,000 visitors enjoyed a session on the Bossaball courts, where they received an introduction into the sport by the Dutch, Belgian and Colombian players. Austrian Airlines summed their marketing activities up with this video:

Bossaball partners up once again with International Volleyball Federation

One year later, the FIVB took Bossaball to the Olympic Games 2016 in Rio de Janeiro. The federation had reached out to different organizations, including Bossaball International, to be a part of the #VolleyballYourWay movement at the FIVB’s Copa Courts, offering an opportunity to engage with new fans during the Olympics Games 2016 in Rio De Janeiro, right at the panoramic Copacabana. Five national teams participated in the tournament #AtTheCopa: Colombia, Brazil, Belgium, who got the bronze medal, Argentina, who won silver, and the Netherlands, who took home the gold medal.

The international TV rights of the 2017 Beach Volleyball World Championships from Vienna were managed by the Red Bull Media House, a multi-platform media company with a focus on sports, culture, and lifestyle that is closely connected with the world-known energy drink Red Bull. After previous features of Bossaball by various parts of the Media House, which you are able to read more about here, the Austrian department of The Red Bulletin was sent out to the Danube Island in order to have Bossaball covered in yet another article. 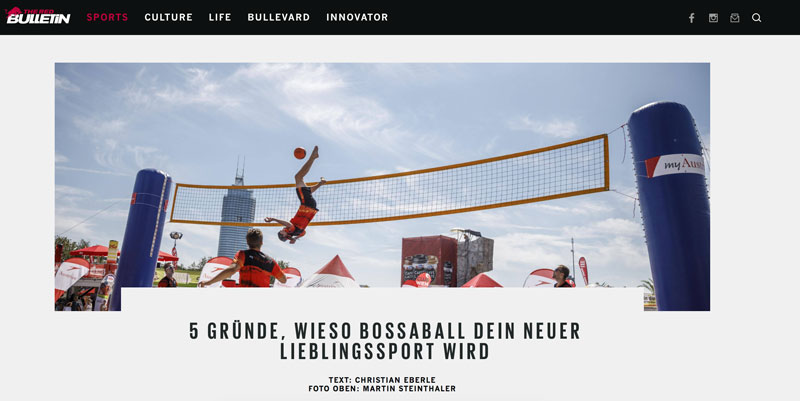