On the 13th of July 2017, the yearly summer fest was held at the PUMA headquarters in Herzogenaurach, Germany. A day full of activities was awaiting the around 1.000 employees, which are based at the German’s sports brand main office in Northern Bavaria. In the square that is located in between the main buildings and that gave room to food trucks, a music stage and a sunlit terrace, the Bossaball court took up the premium spot!

In full view from the offices and under the glowing sign of PUMA, a team of eight Dutch Bossaball exhibition players set up the court in perfect conditions for a summer party. Throughout the afternoon and the evening hours, the Dutch team showcased the sport and led an employee tournament. Six teams had signed up for the competition. After an introductory class for the Bossaball novices, the PUMA teams got their competition under way. Having understood the rules and scoring possibilities of Bossaball perfectly, the team PUMAlicious took away the title. Using their soccer skills, they were scoring one three-pointer after another. 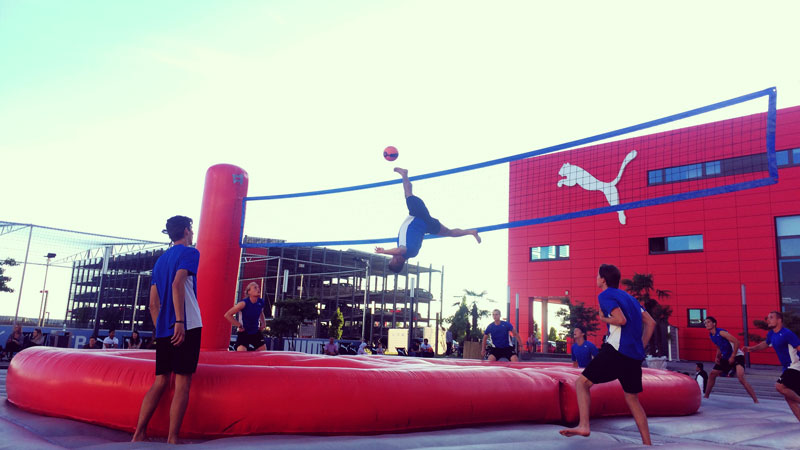 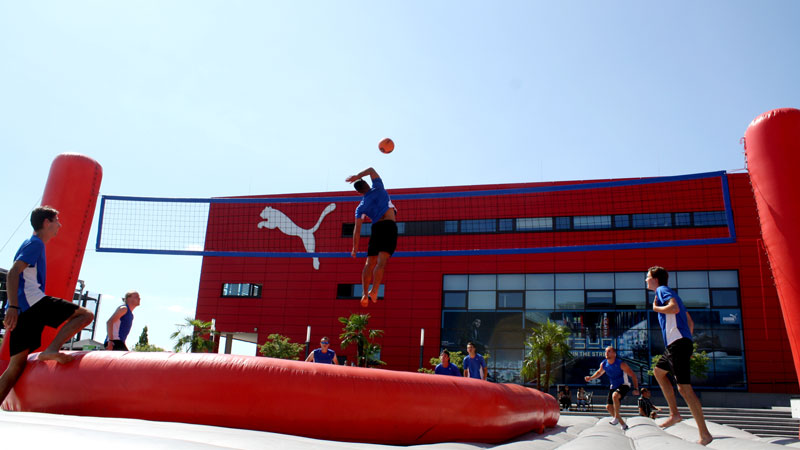 The Bossaball court was set up right in front of the PUMA main store. 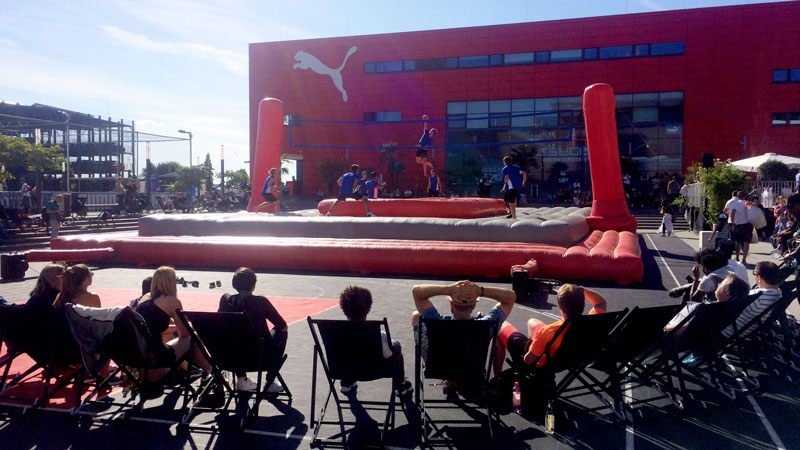 Employees watching the Bossaball exhibitions at the Puma HQ. 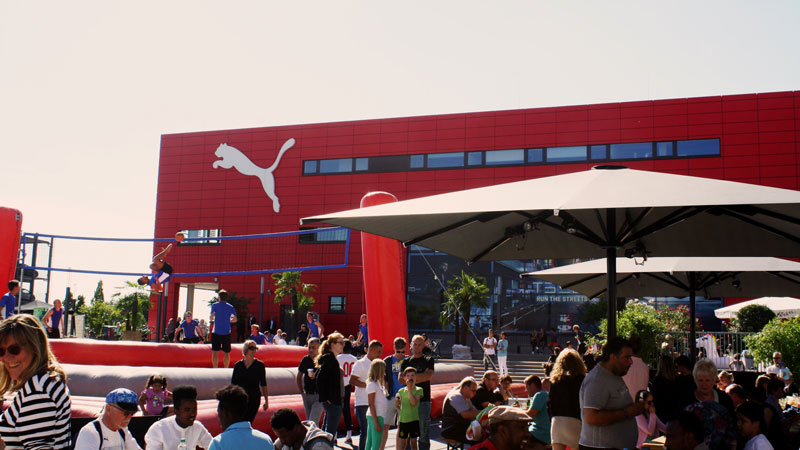 Bossaball in the patio between the PUMA buildings.

On the very same day, PUMA inaugurated a new bridge that will connect a yet to be finished administrative building with the already existing headquarters. For such occasion, FIFA world players Lothar Matthäus, Nadine Kessler and the Bavarian minister of finance, Dr. Markus Söder, were honorary guests for the official event that marked the beginning of construction works.

Already in 2012, Bossaball had been in Herzogenaurach – only a few kilometers away from the PUMA HQ. Back then, the sport was showcased at the Adidas Olympic Day, an event that was set up in the view of the 2012 Olympic Games in London. Five years later, Bossaball has now as well visited the other major German sports apparel brand. Both companies are located in the Franconian small town Herzogenaurach. Something that is owed to the fact that the founders of Adidas and Puma were brothers. 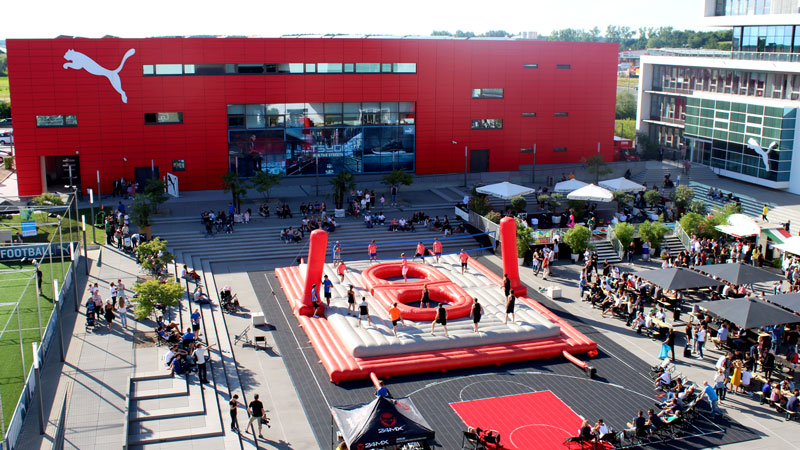 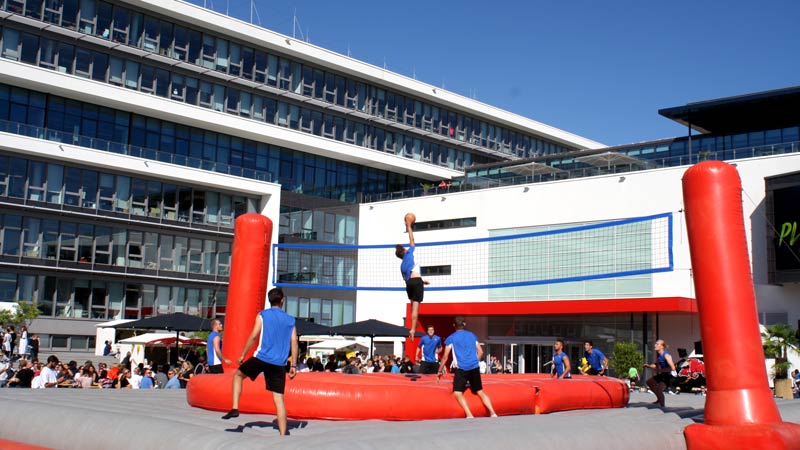 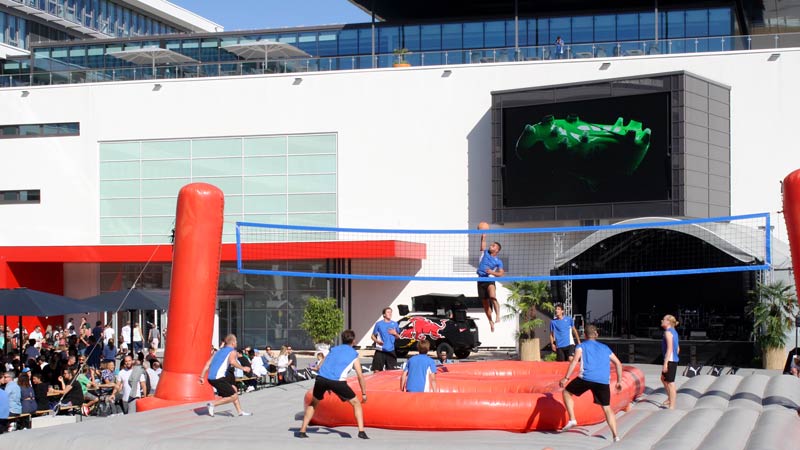 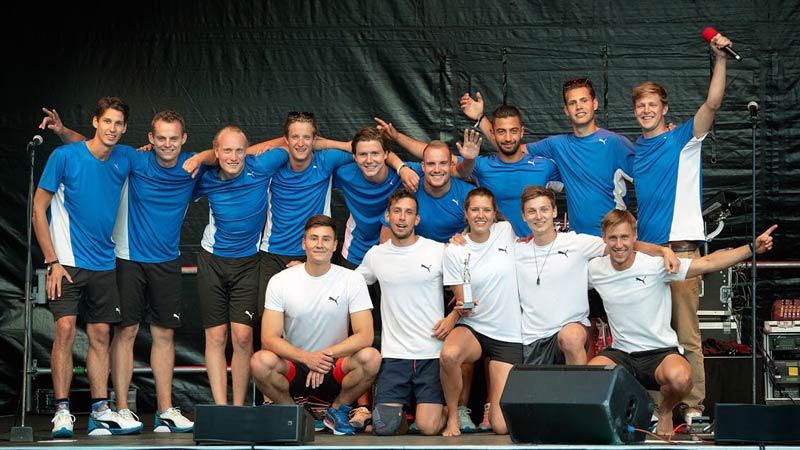 The brothers Adolf and Rudolf were partners in a shoe company the elder brother Adi started, Gebrüder Dassler Schuhfabrik (Dassler Brothers Shoe Factory). Rudi joined in 1924 and the two brothers led the company to international fame, supplying many top athletes in the 1930’s with their revolutionary sports shoes. However, the brothers became rivals following World War II and started their own companies in 1948. Since then, PUMA has gone on to become one of the most stylish and popular sportswear companies in the world. Over the decades, PUMA has sponsored world class athletes such as Pelé, Usain Bolt and various national teams, most of them from the Caribbean and Africa.

Dive into the action with the official PUMA summer party after-movie: