Nestlé tours with Bossaball for a Brazilian summer

Bossaball’s first major event and the launch in Brazil took place in Praia Grande, Santos, Guarujá and Caraguatatuba. All of them are beaches in São Paulo. The Nestlé brand activation, with the support of the Secretary of Youth, Sports and Leisure of São Paulo, lasted for the month of January and February 2007. It was an honour and coincidence that we launched our sport in Santos as Pele is one of the main inspirations while creating our music and sport concept. Nowadays one can visit the Pele Museum and you can find out that Pele was not only one of the best soccer player all times but also recorded various bossa nova records for instance with Elis Regina and Sergio Mendes . 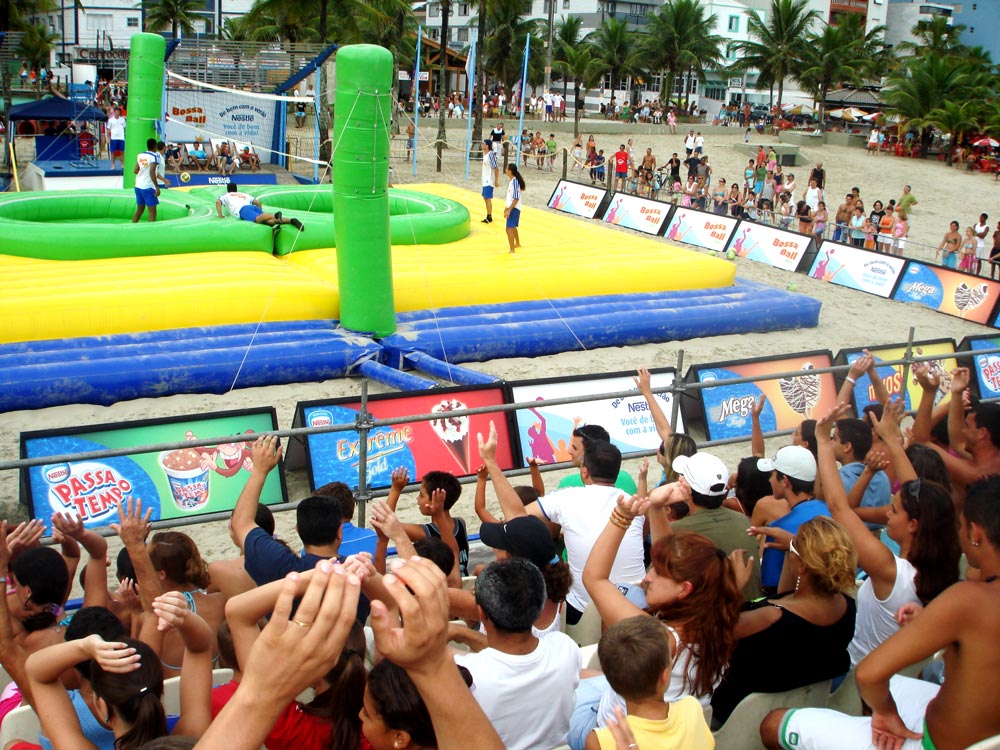 The event series was organized with the sponsors Nestlé, a Swiss transnational food and drink company, and the Secretary of Youth, Sports and Leisure (Sejel) of São Paulo. “I’m sure Bossaball will win the public’s sympathy. Besides the dynamism, it is also very fun,” said the Secretary of Youth, Sports and Leisure, José Carlos de Souza. “With initiatives like this, we’ve created attractions for locals and tourists this summer.” The first presentation of this novelty took place in Praia Grande, from Thursday the 11th to Sunday the 14th of January 2007. Nestlé Brazil launched a special section on their website, where people were stimulated to come and play during the Nestlé brand activation. 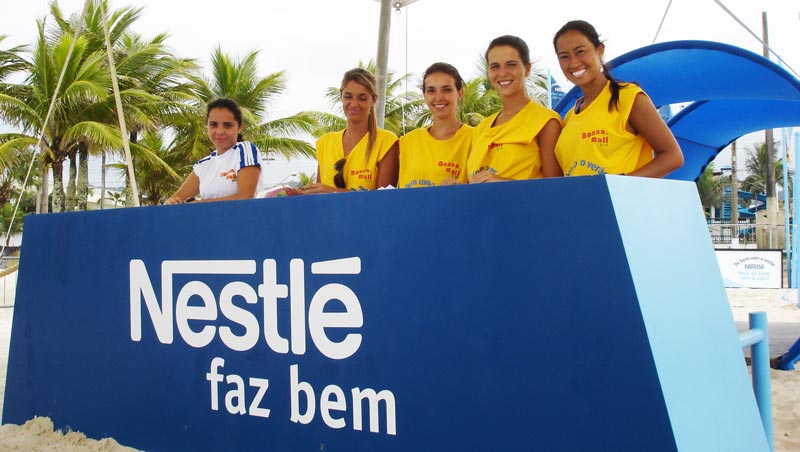 The team of athletes trained in the Esporte Clube São Caetano, where they prepared for the exhibition matches. In between the games, the public was invited to participate. After the activation in Praia Grande, the Bossaball court was set up in Santos, Guarujá and Caraguatatuba in the following weekends. Each installation on the beach featured a grandstand with capacity for 150 people, who could watch the games for free. In order to participate, the beachgoers had to collect two packs or cups of ice cream of the Nestlé sortiment. The new sport was created by Belgian Filip Eyckmans, who decided to unite his great passions: sport and music. “I am a frustrated tropicalist, because I was born in a cold country. Brazil, bossa nova, electronic music, football and capoeira are my passions“, says Eyckmans, who was accompanying the development of the project. In love with Brazil, the music promoter had the idea after spending a vacation in the country. “He combined the techniques of football and volleyball with gymnastics. The name also refers to Bossa Nova as a tribute to the Brazilian music style“, explained the coordinator of the sport, David Pinto Atalla. For Atalla, it’s just a matter of time for Bossaball to become a national craze. According to him, in Europe there are volleyball federations that have linked the sport to their competition programs and events. “These attitudes prove the growth and demonstrate the credibility of this attraction,” he said.

Press attention was massive and more than 15 TV Channels covered the tour. Get into the Brazilian groove and watch the news features!