Bossaball returned to the United Arab Emirates between the 1st and 8th of December 2018! Mobile provider Swyp and Bossaball hit the beach in Abu Dhabi, at the A’l Bahar Corniche. Swyp presented exciting activations at A’l Bahar featuring live DJ’s and our thrilling new sports experience.

After events with Etisalat and exhibitions during the Dubai Fitness Challenge and the Sharjah Fun Fest, the mobile brand activation with Swyp spread out across two weekends of exciting entertainment, featuring live DJ’s and Bossaball, which complemented the energetic event with its versatile activity.

Visitors could join in for the fun in one of the many interactive workshops being held or enjoy watching the exhibition matches with Bossaball players from the Netherlands, Belgium, Spain, Brazil and Morocco, which showcased the sport in front of the impressive skyscrapers in the United Arab Emirates. 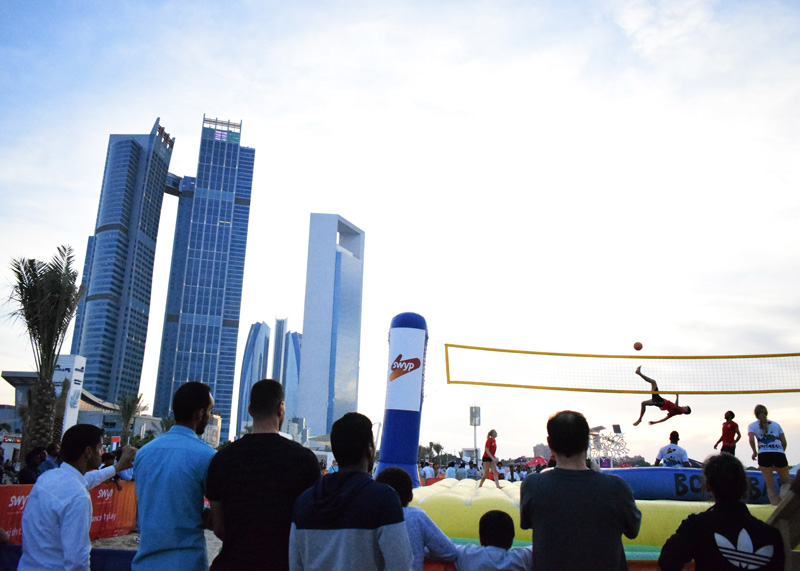 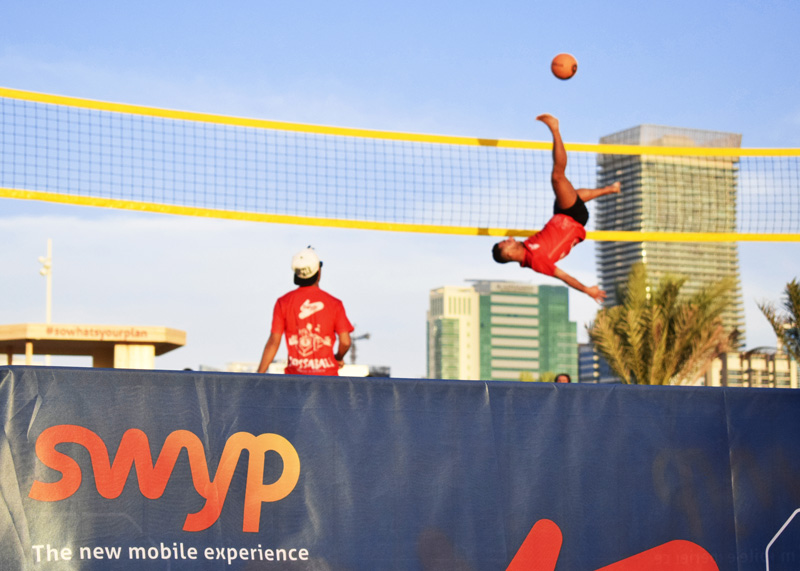 Swyp is the new youth mobile brand by Etisalat, a multinational Emirati based telecommunications services provider. Etisalat launched novel mobile service Swyp targeting youngsters: dubbed as “the companion brand of your lifestyle” by its official website, Swyp is only available to those aged between 15-29.

Etisalat directly delivers the Swyp SIM to millennials, which have ordered them either through the official app or they can collect it from one of Etisalat stores at emblematic Emirati venues such as Dubai Mall, Burj Dubai or the Mall of the Emirates.

Swyp partnered up with multidisciplinary sport Bossaball to target the Emirati youth and spread the word of the new provider via an eye-catching beach activation, right in front of Abu Dhabi’s skyscrapers at the Corniche. 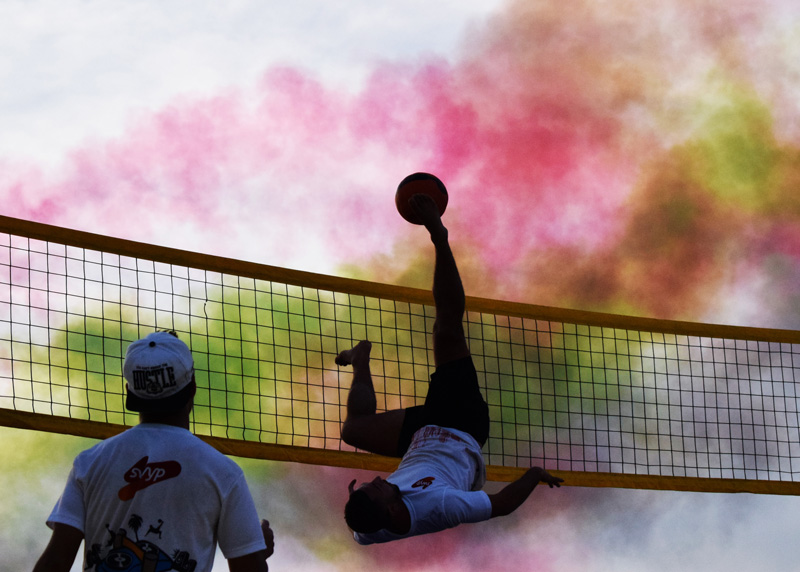 The Abu Dhabi Corniche has long been a firm favourite for families, fitness fanatics and those just wishing to get some fresh air. Nowadays, the Corniche features as well the 80,000-square-metre A’l Bahar location, a vibrant beachfront located on the Abu Dhabi Corniche, which includes a variety of sports facilities, with basketball and beach volleyball courts, football pitches and an outdoor gym. The Gulf News announced the Bossaball demos and clinics that took place right on the A’l Bahar beach!

On the 2nd of December, the United Arab Emirates celebrated the 47th anniversary of the Nation, which in 2018 coincided with the centenary of the birth of the late Sheikh Zayed Bin Sultan Al Nahyan, the founding father of the UAE. 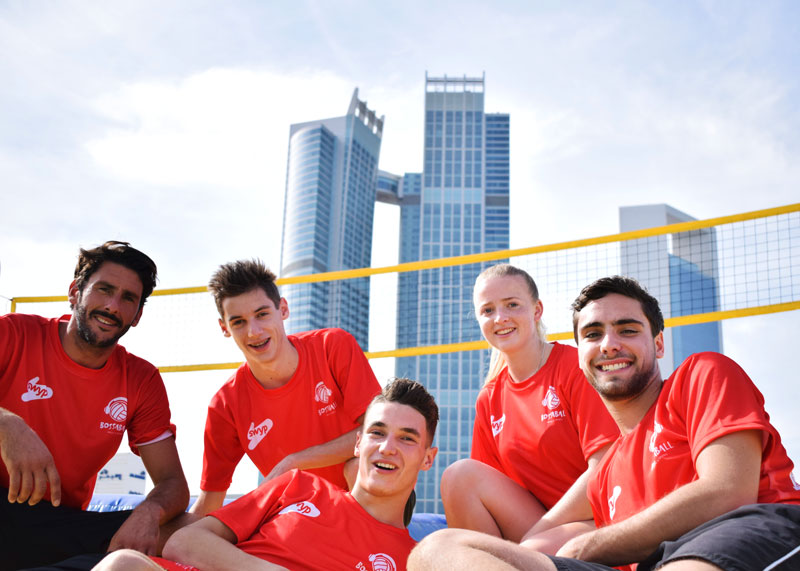 The Abu Dhabi Corniche was the setting for performances in cooperation with the UAE’s Armed Forces. The four Emirati-based airlines Emirates, Etihad, flydubai, Air Arabia and the “Al Fursan” took to the skies in unison on December 2, to celebrate the UAE’s 47th National Day.

“Al Fursan” (The Knights) are the United Arab Emirates Air Force aerobatic display team. With their air show, they delivered a spectacular backdrop for the mobile brand activation with Swyp and Bossaball. 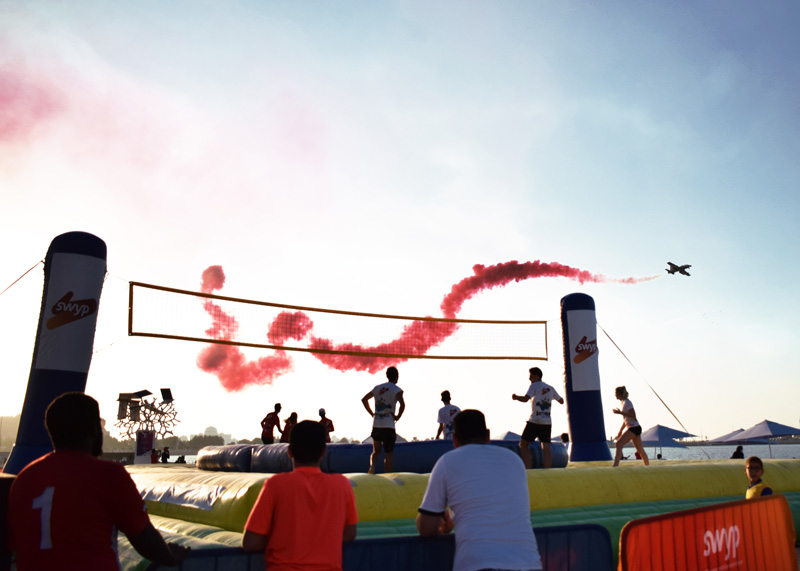 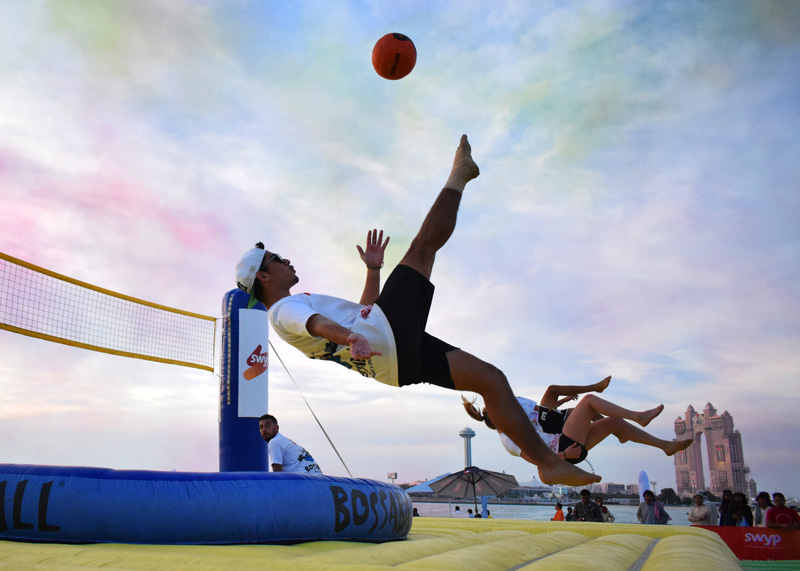 The mobile brand activation in collaboration with Swyp put the finishing touches on an exciting year 2018, when Bossaball again went around the globe! Check the best shots from events in Europe, South America and Asia and see the “Al Fursan” air show happening right above the Bossaball court in Abu Dhabi.