Bossaball Italia proposed to Turin the first ever Bossaball performances in Italy. Turin, the capital of the Piedmont region, is an important business and cultural centre of northern Italy.  In collaboration with CRAI and Go&Fun, Bossaball had the opportunity to present Bossaball on the main square, Piazza Castello.

In September 2014, the heart of Turin was transformed into a sports arena, where the event took place within the “Sports Show”: a tasty appetizer to the atmosphere of “Torino 2015 – European Capital of Sport“. The event was sponsored by CRAI and Go&Fun. CRAI is a big Italian company of supermarkets and grocery stores. Go&Fun is the first green energy drink, an alternative to traditional energy drinks. The public enjoyed the products, made available by CRAI and Go&Fun, for free.

Eight of the best European players from Belgium, Netherlands and Slovenia, mixed with Italian Bossaball players, played several exhibition matches to show people what Bossaball is about. During the day, the players carried out several trainings in order to take the new Italian players to a higher level. Only weeks before, these have had their first Bossaball experience during a training camp on the Bossafarm in Spain. During the event, the players surprised the audience with incredible maneuvers made possible by the inflatable court and the trampolines. In the evening, the spotlights on Piazza Castello brought the game and the Bossaball tricks even more to the fore.

Alessandro Barbero and his Kobra Team guaranteed chills and thrills during the BMX Freestyle Show. Barber is famous for having finished fifth in the final of “Italy’s Got Talent” in 2013. Additionally, his trick called “Italian Job” gained him a certain fame in Europe and the United States.

Read more about the event here. 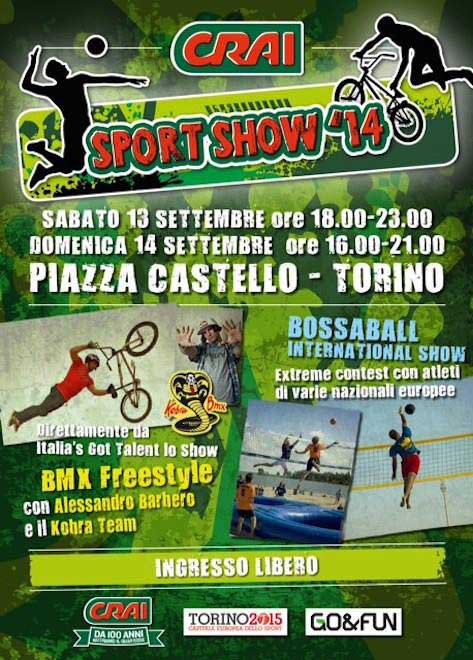