After the succesful edition of 2019, Multiplaza decided once again to hold a two week tournament in the centre of the famous Bogota shopping centre. Over 24 teams participated and lots of players saw each back for the first time after a long time seperation due to all covid 19 restrictions. Although health regulations were pritty intense , the bossaball cup could be hold in more or less normal circumstances with “masked players” jumping metres high into the sky. 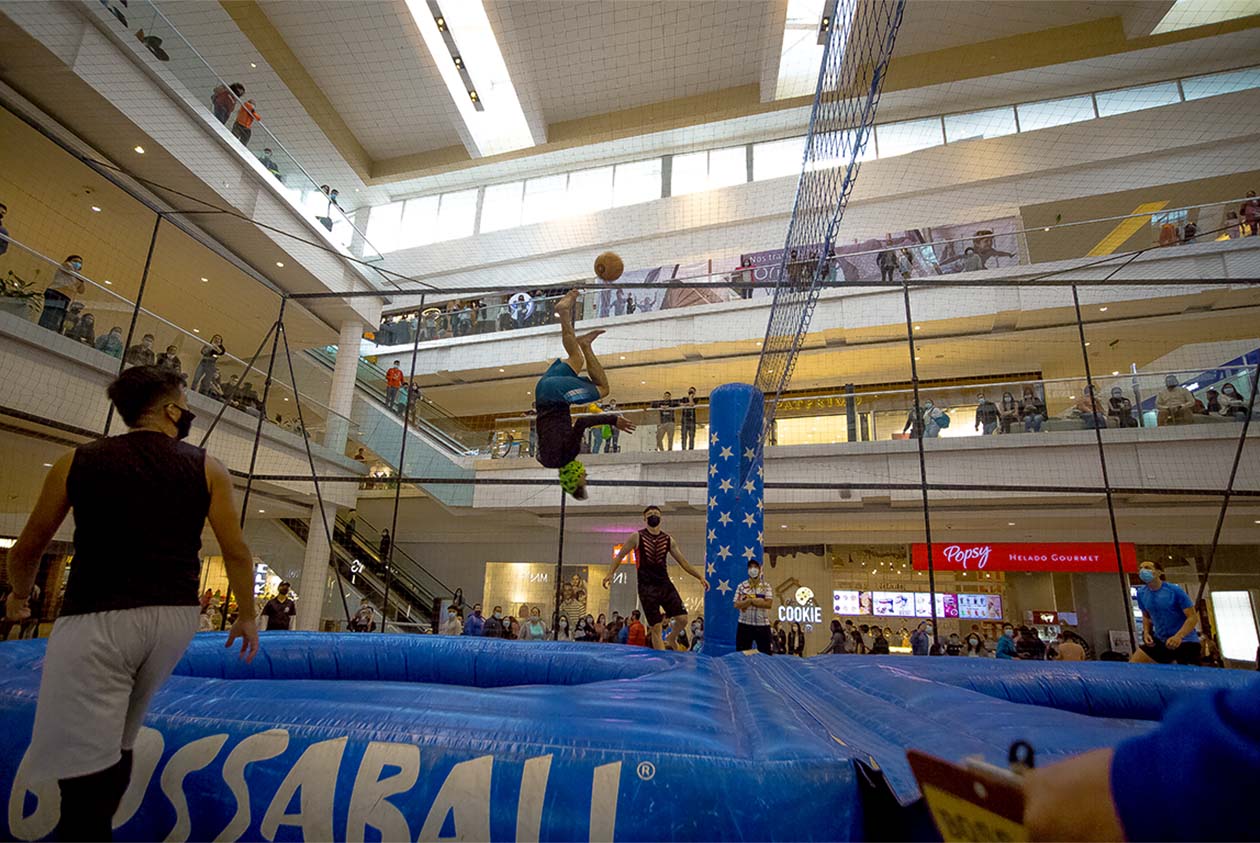 Bossaball Sports sl wants to express its honest respect to the organizers of Multiplaza to take the risk setting up this event during times full of restrictions. both players and public shared a high level of emotions as finaly freedom seemed to re appear around the corner. Hopefully a new edition  3th edition can be set up in the near future back under normal circumstances. 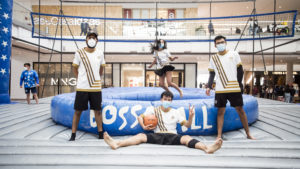 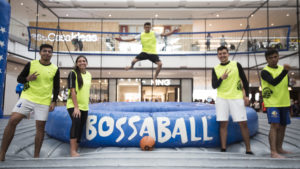 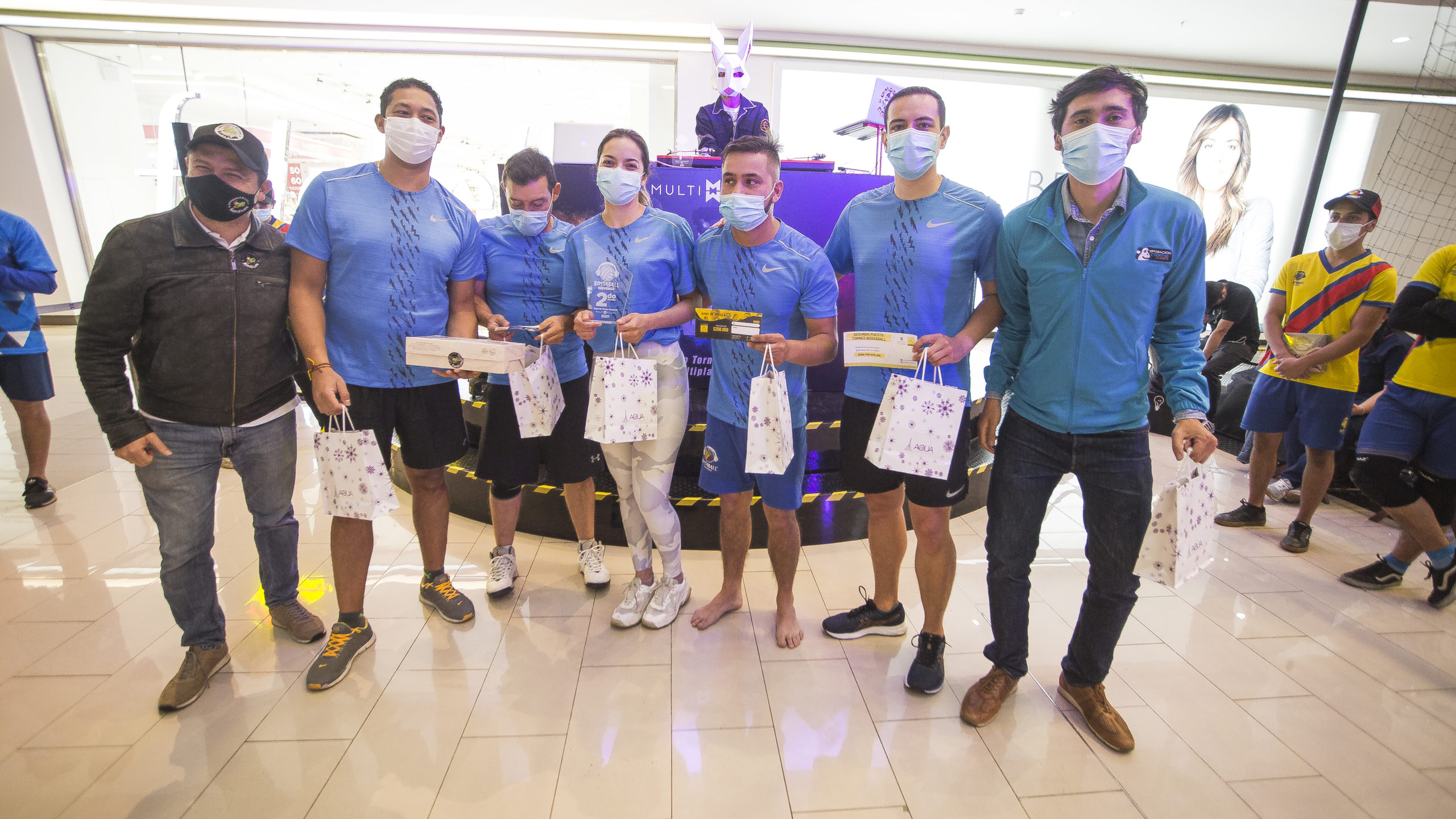 Multiplaza Bogota introduces Bossaball during the Copa AméricaThe Multiplaza Bogotá shopping center installed the Bossaball court in the central square of the mall in the capital of Colombia.

Multiplaza Bogota was in search of a sporting activity for the weeks of the Copa América 2019, the main official international men’s soccer tournament in South America which is organized by the South American Football Confederation (CONMEBOL). The shopping center found in Bossaball the appropriate activity for a sports activation during the weeks of the football tournament, which in 2019 took place in Brazil, the country that with its sports and musical culture gave the inspiration for Bossaball later turned into a participation of bossaball during the RIO 2016 Olympics where an international demonstration of the new sport was held at the famous Copacobana Beach.

Between June 15 and July 25, 2019, an open Bossaball tournament with 42 teams, try-outs and recreational Bossaball vacations for children were held. All these activities in the mall were combined with spectacular exhibitions of the national team of Bossaball Colombia who had participated in 2018 an international bossaball tournament during the world cup beachvolley in Vienna.

Multiplaza is a chain of shopping malls, owned by Grupo Roble of El Salvador, in Central America. The shopping center in the Colombian capital is one of the largest of the chain and is aimed at a young audience. It is the most recent Multiplaza inaugurated on June 12, 2017.

For the first day of the activity in the mall, a music show was set up with AAINJAA. With their energetic drums, Afro-Colombian and Brazilian rhythms mixed with funky beats, Bossaball kicked off in the Multiplaza Bogotá with an intense choreography.

Bossaball in the Multiplaza mall in Bogota, Colombia.

42 teams participated in the open tournament. The teams had to be composed of 6 people, with a minimum of four men and two women. Following the characteristic that Bossaball is one of the few mixed gender team sports, there always had to be at least one person of each gender on the court. The tournament was pepped up with DJ sessions and a live score board coverage for the finals.

The different floors and levels of the shopping center provided the perfect setting for the Bossaball activities and the spectators could enjoy the exhibits from a panoramic perspective. The project at the Multiplaza Bogotá mall again demonstrated that the Bossaball court can be installed anywhere. 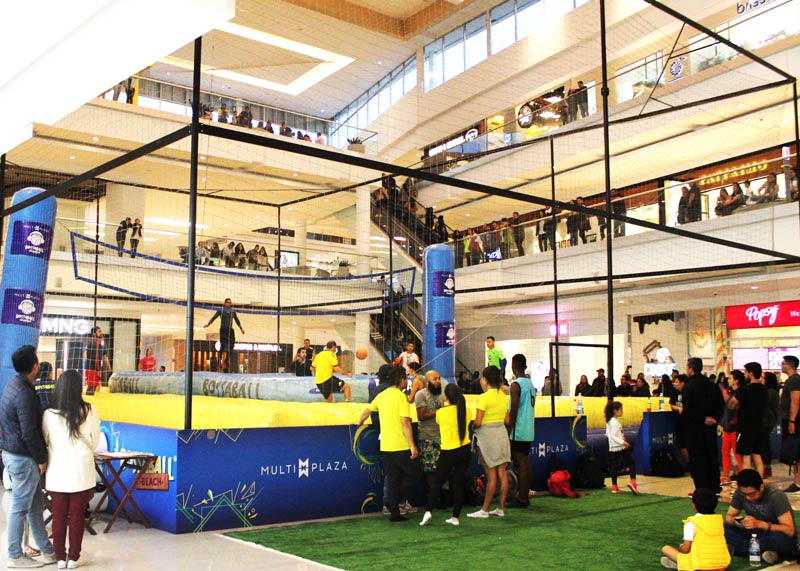 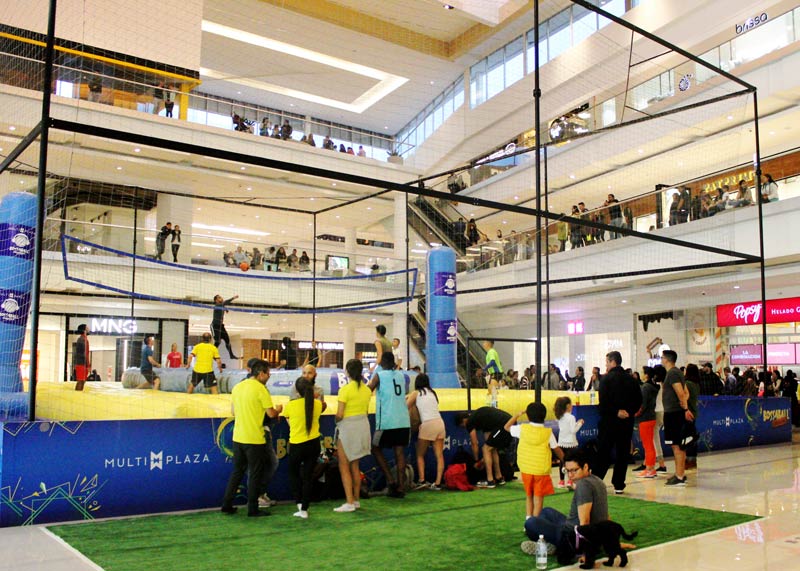 “We have managed to take this activity to universities and colleges in order to get closer to more people and link them to the project and the tournament organized by the Multiplaza shopping center. We reached 42 teams and the competitions take place on weekends, ”said Gabriel Eslava, director of development for Bossaball in Colombia, in an interview with MSN.com. Together with Andrea Prado, events promoter at Multiplaza Bogotá, Gabriel Eslava gave an interview on DirecTV, talking about the development of Bossaball in the country and the innovative activity that was taken for the first time to a shopping center.

Bossaball practices and workshops for the public were priced at $ 12,500 COP (€ 4 EUR). However, presenting a receipt with a minimum purchase of $ 50,000 COP in any of the stores, a discount for a final price of $ 7,500 COP as applied. This encouraged purchases and generated a direct return to the stores of the Multiplaza Bogotá.

Another element of the sports activities in the mall were recreational vacations for children and teenagers. Through this link you can see interviews and testimonials from both parents and children who participated in the Bossaball course and clinics with different types of fitness related activities.