Bossaball is chosen for another airline brand activation

Bossaball at the FIVB Beach Volleyball World Championships 2017 were 10 days of action under the Viennese summer sun, which entailed clinics for all the Austrian beach volleyball fans and two Bossaball tournaments with the teams from Colombia, Belgium and the dominant line-up from the Netherlands. After previous collaborations with TAM Airlines and TUI, this time Austrian Airlines sponsored the Bossaball activity on the Danube Island – the next convincing airline brand activation.

Two Bossaball courts had found its spot right next to the especially set up stadium on the Danube Island – an amphitheater for 10,000 beach volleyball fanatics. After the A decade in the Air Cup in 2015, At the Copa during the Olympic Games 2016, now for the third year in a row, there has been an international Bossaball tournament. This year went under the slogan of Vienna Calling. During the 10 days, two tournaments were set up on the two weekends. After having won on the Copacabana during the Olympic Games, once again, the team from the Netherlands went on to win the competitions on both weekends. Leaving behind the teams from Belgium and Colombia, who both came in second once on respective weekends. Have a look at some pictures of the Dutchmen, who defended better and spiked harder, and the other teams, flying over the Danube Island. Austrian Airlines – a charming way to fly on the Bossaball court

The Bossaball activities did not only entail tournaments with the professional players, as well workshops for all the Austrian beach volleyball fans were offered in the Vienna summer sun. Bossaball had found Austrian Airlines as a sponsor for the event and throughout the 10 days, more than 2,000 participants signed up for a prize draw for two flights to Los Angeles. All of those 2,000 visitors enjoyed a session on the Bossaball courts, where they received an introduction into the sport by the Dutch, Belgian and Colombian players. Bossaball has shown itself yet another time suitable for an airline brand activation. Austrian Airlines summed their marketing activities up with this video:

When Bossaball was at the Olympic Games 2016 in Rio de Janeiro, the sport and its exhibition cup were widely covered by the international media. For the Vienna Calling Cup, a film team of Turkish TV Channel TRT World covered the second weekend of the Bossaball tournament during the Beach World Champs 2017 and sheds light on the sport’s recent past and future plans. Undoubtedly, Austrian Airlines was able to extend its reach and impact by the fact that Bossaball Sports SL brought in an international TV channel to cover the activities on the Danube Island.

#WorldChampsVienna on the Danube Island

Although the country is not on the seaside, beach volleyball has a massive support in the Austrian sports panorama. This is mainly due to the long history of the tournaments in Klagenfurt. A city, which hosted the FIVB Beach Volleyball World Championships in 2001 and since then has been a Grand Slam tournament, officially being part of the Swatch Beach Volleyball Major Series. The organizing agency of the Major Series, ACTS Sportveranstaltungen GmbH, which collaborated with Bossaball Sports SL for the event, decided to take the World Champs 2017 to the Austrian capital. Having a look at the following stats, they most certainly made a wise decision: Location of the Bossaball courts on the Danube Island in 2017

Furthermore, the beach volleyball hype in the last decades is due to the success of various male players. Two of them, Clemens Doppler and Alexander Horst, joined forces for most certainly their last big championships, both entering the World Champs at age 36. In stunning manner, the Austrian couple surged through the stages and, elevated by the Austrian supporters, even reached the final. In a close match against Brazilian couple Andre Loyola Stein and Evandro Gonçalves Oliveira Junior, they took home silver medals, losing 23-21 / 22-20.

It was as well the Austrian beach volleyball stars who kicked off the FIVB Beach Volleyball World Championships in imperial style. At a press conference held at the city’s iconic Spanish Riding School, they served it up to Vienna’s famous Lipizzaner horses. 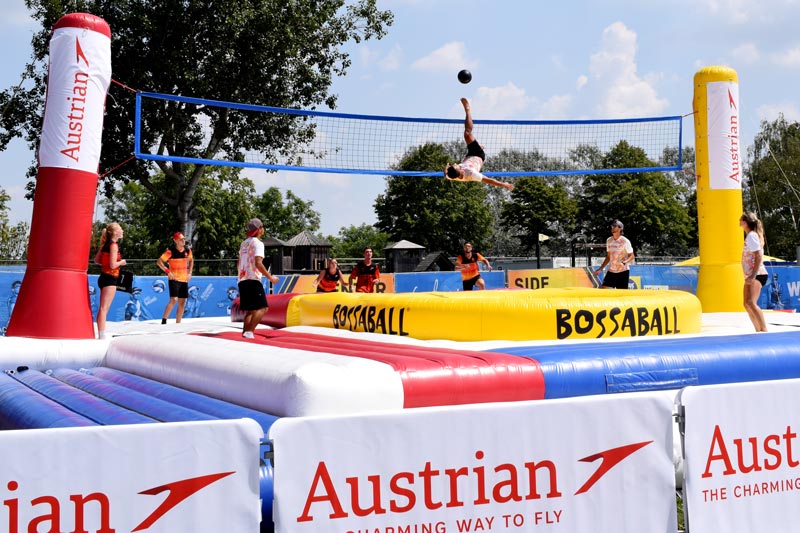 It was one of the hottest events of the summer: 100,000 spectators, 33° C, great atmosphere: The Vienna Major 2018 kept beach volleyball fans on the Danube Island in Vienna in suspense. Bossaball, integrated into the beach village set-up at a prime location right next to the stadium, featured show matches between teams from Bossaball Netherlands and Bossaball Spain and workshops for all the visitors on the Island. Throughout the five days of the event, from the 1st till the 5th of August, more than 800 people would participate in our guided activity.