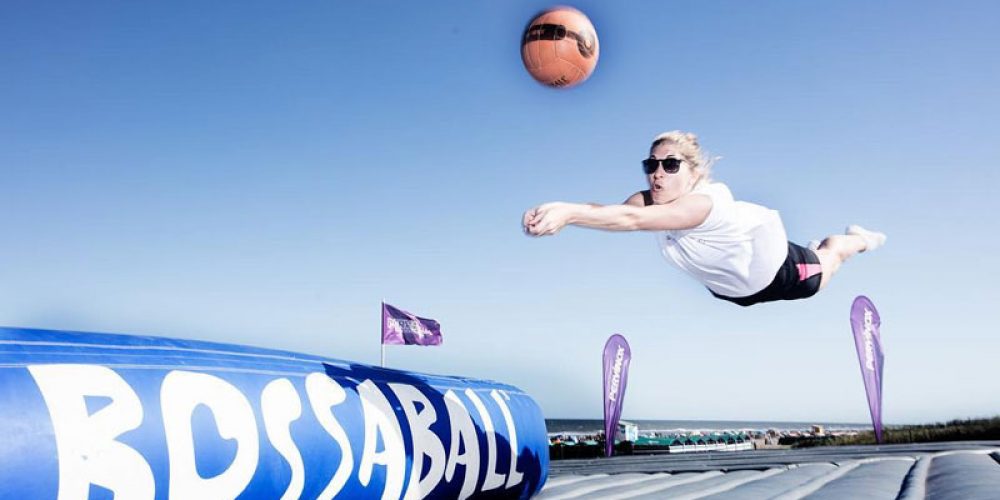 A uniquely acrobatic and energetic game, Bossaball is an exciting blend of sport, music and great fun. Incorporating elements of volleyball, football and gymnastics, a game of Bossaball is played on a specially designed inflatable court with trampolines integrated in the middle. Trampolining itself is often promoted as one of the best and most effective exercises! The NASA believes that “rebound exercise is the most efficient, effective form of exercise yet devised by man.”

The five-time Spanish National Team trampolining champion Cris Cabrera points out: “Trampolining is a low-impact workout that tones muscles and improves coordination. There are just countless health benefits of rebounding.”

In Bossaball, the players both rebound from and bounce on the trampoline and the inflatable court. Exercising on an inflatable court provides the athletes with numerous cardiovascular, health and fitness benefits what makes Bossaball a superior activity that can help you burn calories and bolster your metabolism, immune system and many other vital organs.

Bossaball improves your sense of balance

One of the most important benefits of the Bossaball court is the development of body balance. When standing on firm ground, one can avoid the problems of balance, but when rising from the surface of the inflatable or the trampoline, the players must locate new and constantly changing centers of gravity. Continual practice on the court develops skills and proficiency in sensing and maintaining proper balance.

Furthermore, in response to the forces of gravity acting on the body in all directions when you are floating in the air, both sides of the body and brain become engaged in maintaining balance and coordination. This results in bilateral motor skills development, unlike other sports where there is constant gravity and one side of the body may be favored more than the other.

Bossaball therefore offers its participants an unprecedented way to be physically active while exercising on a soft playground. The body is in perpetual movement due to the constant control and posture adjustment work-out in order to prepare to hit the ball or perform a defensive move after each bounce. Concentration, alertness and coordination are put to the ultimate test. 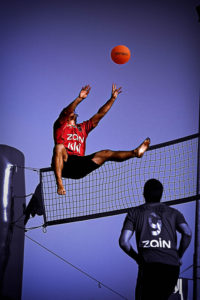 One of the most important benefits of the Bossaball court is the development of body balance.

The court challenges your coordination

On top, Bossaball demands the whole body in order to pass the ball. Volleyball skills are executed to play the ball with either hands or arms, while the soccer touch allows the players to pass the ball with any other part of your body: head, chest, knees or feet. The participants sharpen their feeling for the ball and their entire body coordination while performing the volley and soccer touches.

Additionally, Bossaball allows sportsmen of other disciplines to amplify their skills by exercising on the unique playfield. Volleyball players refine their capacities and practice their jumping technique for the smash, while soccer players practice bicycle kicks on a soft and safe underground and improve their juggling skills and tricks. Gymnasts can unveil their hidden ball sport talent and perfect their trampolining skills.

In every moment, the inflatable court forces the players to adjust the body position accordingly. This leads to improved fine motor skills, which will assist in other sports that require a lot of hand-eye, foot-eye and general coordination. 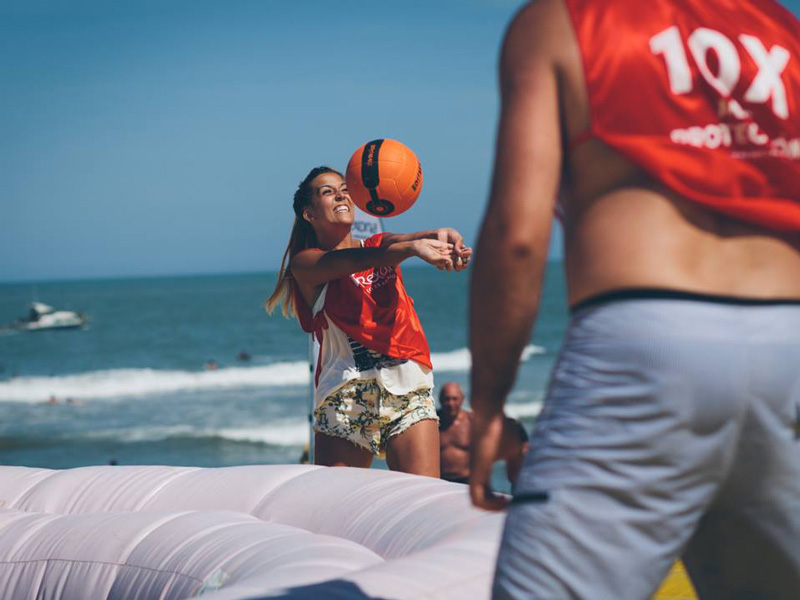 The participants sharpen their feeling for the ball and their entire body coordination while performing the volley and soccer touches.

The inflatable minimizes the risk of injury

The safety of the blow-up court allows players to carry out a large range of techniques, tactics, team strategies and acrobatic movements in order to hit the ball, such as flips and turns in the air.

In comparison to other sports, in Bossaball every move is easier and gentler on the knees, ankles and bones. The soft playground absorbs the weight of the player after every step and the trampoline takes in the impact. After a defensive dive, the athletes land softer on the inflatable than on the hard surface of a volleyball court or in the sand of a beach volleyball court.

Generally, exercising on hard surfaces exerts the pressure on the joints, feet and legs. This may cause pain or injuries to joints, ankles, knees and the back. Running or jumping on an inflatable is more effective because the participants can exercise for a longer time without feeling pressure on their joints. Training on hard surfaces places a force of two to three times of the body weight across your joints, which naturally increases the potential for injury.

Unlike high-impact physical activities like running or any type of exercise that involves sudden stops, starts and pivots, or potentially awkward jumps and landings – such as basketball, tennis or football – exercising and training on an inflatable court is unlikely to damage joints.

Although jumping on the trampoline, for instance, provides an intense workout for the muscles and bones, the jumping mat absorbs 80% of the shock from the rebound.

In conclusion, exercising on an elastic surface has more health benefits and other advantages than exercises such as running, impact team sports or aerobic exercises that involve high impact on a solid surface. When rebounding, the impact is absorbed by the surface and the risk of injuring your muscle and fibers are reduced. The gravitational force measured at your ankles, back and forehead is therefore more equally distributed when you bounce. 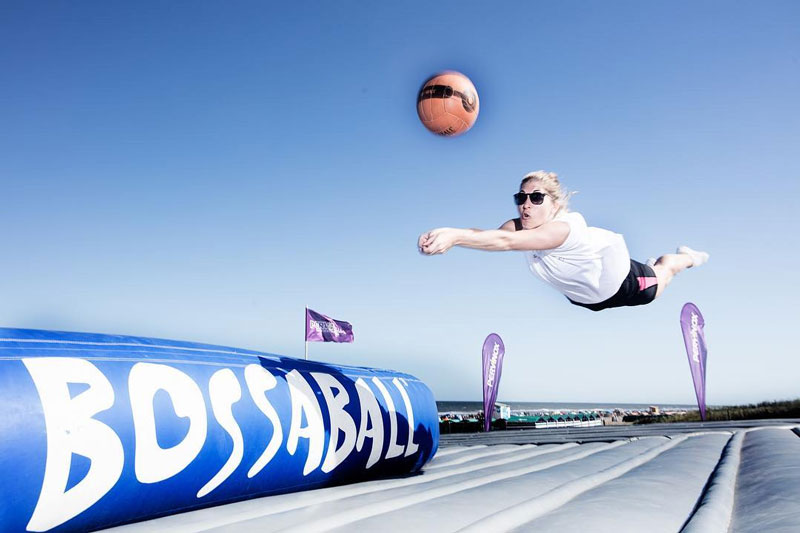 Exercising on an elastic surface has more health benefits and other advantages than exercises such as running, impact team sports or aerobic sports.

Training on the Bossaball court strengthens your muscles over all

Floating on the court or jumping on the trampoline has unique benefits compared to other forms of exercise. It involves increasing the G-force which is the force created on the body as a result of gravity.

When bouncing and rebounding, there is an acceleration and deceleration that happens on each jump. All 638 muscles alternately flex and relax, toning the whole muscular system. The higher the jump, the greater the G-force that is exerted to bring the jumper back to the mat, so that each muscle and cell are impacted in a stronger way. During a project in Singapore, it was proven that after practicing Bossaball for several weeks, the players had gained 20% in their jump height.

Rather than other workouts that focus strictly on a certain area, repeatedly bouncing off the soft surface of the Bossaball court, provides you with a full-body workout. However, not only your legs, thighs and buttocks are especially conditioned and toned by the consistent jumping movements.

John Beer, Olympic coach to the British trampolining team, adds: “Your core-stability muscles are almost constantly engaged to keep you stable and balanced, meaning a tauter, stronger stomach and lower back.” He also agrees with NASA research that using a trampoline helps improve whole-body strength. Abdominal muscles are developed because your body is required to flex and release every time it springs off a trampoline. 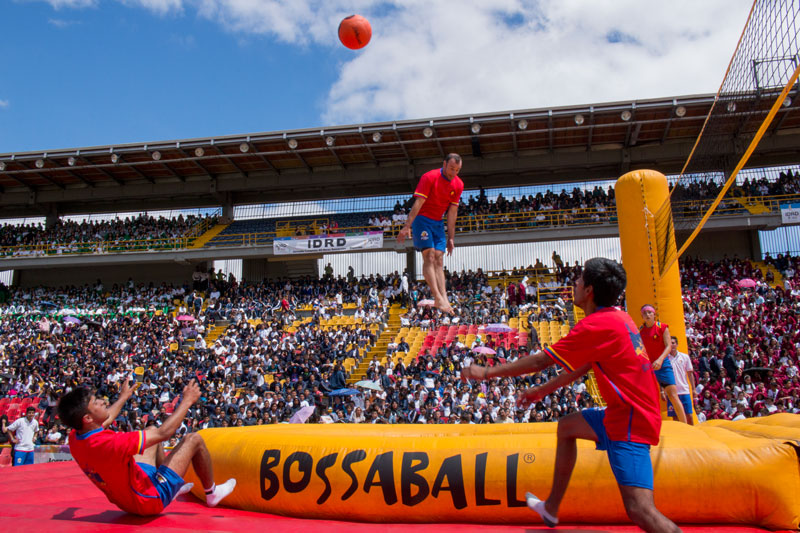 When bouncing and rebounding, all 638 muscles alternately flex and relax, toning the whole muscular system.

According to NASA’s Journal of Applied Physiology, rebounding exercise, which is steadily executed on inflatables and trampolines, is 68% more efficient than jogging. The study from NASA also found that a 75 kg individual spending 1 hour on a rebounder, will burn more calories than the same person jogging for an hour.

Furthermore, 10 minutes of bouncing on a trampoline is a better cardiovascular workout than 33 minutes of running. The NASA report said “for similar levels of heart rate and oxygen consumption, the magnitude of the bio-mechanical stimuli is greater with jumping on a trampoline than with running.”

On top, rebound exercise strengthens your heart in two ways: it improves the tone and quality of the muscle itself, and it increases the coordination of the fibers as they wring blood out of the heart during each jump. The aerobic effect while you are rebound-jumping equals and often surpasses that of running. 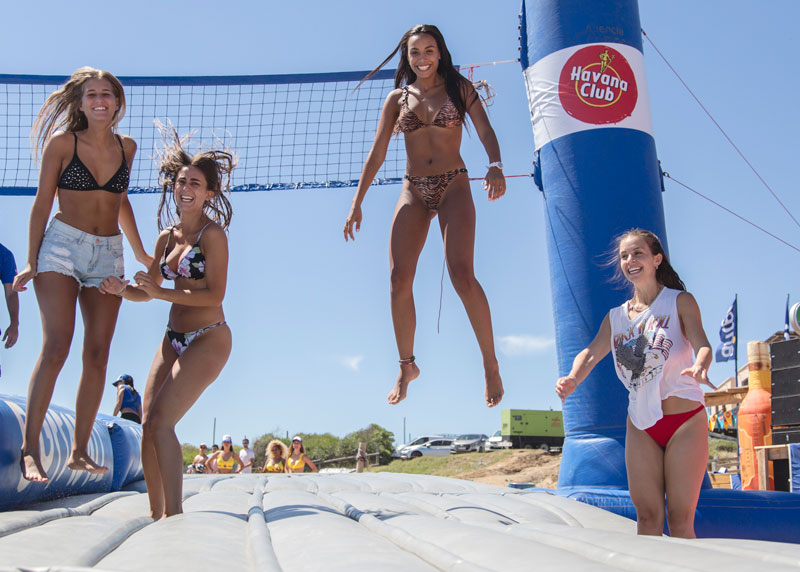 Rebounding puts you in a state of health and fitness

By working against constant gravitational pressure while bouncing, you resist the Earth’s pull. The resistance when moving on the Bossaball court is subtle, but it builds cellular strength. Rebounding’s alternating weightlessness and double gravity on the trampoline and on the court produce a pumping action which pulls out waste products from the cells and forces oxygen and nutrition from the bloodstream into them.

At the bottom of the bounce when the gravitational force is greatest, the valves are closed and toxins are squeezed out from between the cells. As the body bounds up, valves are still closed, toxins are loosened from the cells and nutrients are passed from lymph to the cells. At the height of the bounce the body is weightless, and the valves open up. As the body descends, fluid flows. Toxins are sucked out and away from the cells, then eliminated by the lymph system.

Furthermore, during the brief weightless period when the body is suspended in the air, the lower pressure in the cell promotes the movement of nutrients into the cells, where it can be converted into energy. Thus, the flow of materials to and from cells is improved. This vastly increases one’s level of health. Rebounding also increases the white blood count, thus strengthens the immune system. 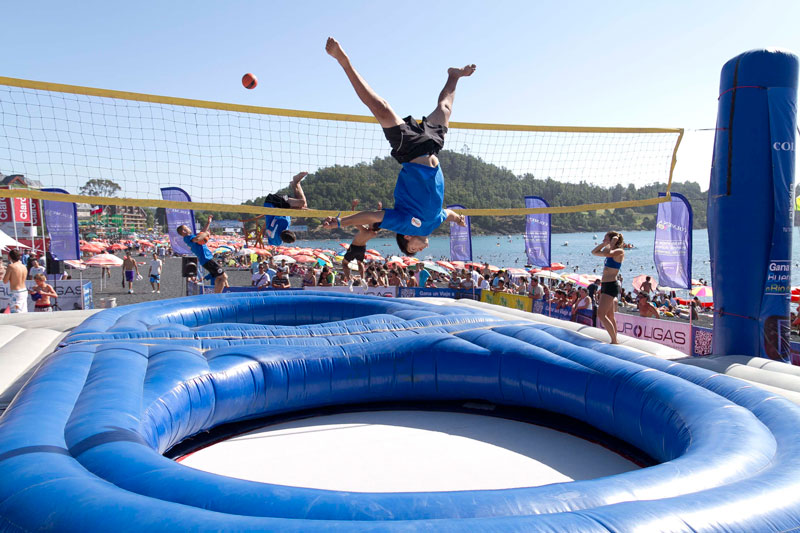 The resistance when moving on the Bossaball court is subtle, but it builds cellular strength.