Bossaball has been introduced at a worldwide scale in schools, colleges and universities. Both physical education teachers and sports counselors have implanted Bossaball in diverse sports projects in order to stimulate the youth with a dynamic activity and challenge juvenile obesity due to sedentary behavior.

In universities, Bossaball has for instance been implemented as an innovative sports activity in physical education studies, as a promotion tool to capture the interest of future talents and students and as a marketing medium to encourage the organization of student sport events.

Bossaball as a curricular element in the Netherlands

The HAN University of Applied Sciences (Hogeschool van Arnhem in Nijmegen) is a university of applied sciences with a campuses in Arnhem and Nijmegen in Western Holland. The HAN decided to implement Bossaball in the curriculum of physical education, as a recreational and pedagogical strategy. Through Bossaball’s sports multidisciplinarity, the theoretical and practical part of the different sports techniques that combines Bossaball, were taught on the same court. This system managed to impact more than 125 students with this innovative university sports activity. Unilever organized a Bossaball tour in México that was set up to serve as a platform to find young talented students with a high potential and to integrate them into the company through a traineeship. Some of the most renown universities, such as the Universidad Nacional Autónoma de México, TEC Santa Fe and TEC Monterrey were visited on the tour, which included ten different educational institutions throughout Mexico. As a result of this activation, Unilever was able to scout a vast amount of highly talented students for their training program called Unilever Leadership Internship Program ULIP.

Bossaball joins Grupo Bimbo and the introduction of its new product

Like Unilever, the multinational Grupo Bimbo implemented Bossaball for the introduction of its new product “Hot Nuts“ to the student audience. A Bossaball tour was conducted through 7 Mexican universities where 13 events were organized to present the new product. The tour included the universities of UNITEC Marina, ULA Florida, UNITEC Atizapan, UNITEC Ecatepec, UNITEC Cuitlahuac, UNITEC South and ULA Valle. In April 2016, Bossaball visited two university festivals in Belgium, the Kiesweek Ekonomika at the University of Leuven and the Cercle Solvay ❋ 21eme Beach Volley at the Université Libre de Bruxelles. Both festivals were looking for an innovative university sports activity and installed the mobile Bossaball court on prime locations on the institutional grounds. Bossaball Tunisia started a long-term collaboration with an Orange brand activation in 2015. Orange S.A. is a French multinational telecommunications corporation that counts on 230 million customers worldwide. Since, the collaboration has resulted in three summer beach tours and three university activation tours.

On both occasions, Bossaball Tunisia managed to add the multinationals Huawei, the largest manufacturer of telecommunications equipment in the world, and Red Bull to the project. As a product of tours on the Tunisian beaches, the Ministry of Higher Education and Scientific Research joined Bossaball Tunisia and the three multinational brands and promoted Bossaball as an innovative university sports activity for students in order to promote cultural and sports animation. Bossaball as promoter of technological and innovative projects

At the sports university Fontys Eindhoven in the Netherlands, Bossaball was a special guest for the inauguration of the InnoSportLab, serving as an example of an innovative and emerging sport. InnoSportNL is a government institution that, through InnoSportLab, offers trial and research facilities for companies, sports and federations and fosters their collaborations.

Innosport NL introduced Bossaball as an innovative university sports activity to the Sporthogeschool Eindhoven Fontys with the aim of setting up a university club. Since then, Bossaball collaborates with this private sports university and through university sports, students have the opportunity to train and play Bossaball. Bossaball as a new sports discipline in university competitions

In Argentina in 2017, the Regional University Games (JUR) were held, organized by the Ministry of Education and Sports, together with the Secretary of University Policies and the Federation of University Sports in Argentina (FEDuA). The objective of the JUR is to promote the academic and human development of university students with inclusive, innovative and supportive competitions and tournaments.

The Santander Río Bank of Argentina, which sponsored and actively participated in the organization of the local Bossaball tournament, together with the FEDuA, collaborated for this edition featuring innovative university sports activities. These were the participating universities UNLP (National University of La Plata), UBA (University of Buenos Aires), Romero Brest (University related to Sports), UNA (University of Art) and UNGS (General Sarmiento University) 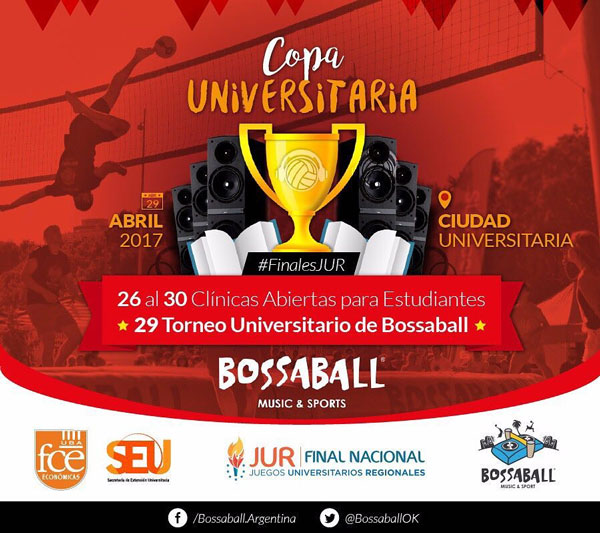 Bossaball as an educational and sports integration tool

The Inter-American Open University (UAI) went on a Bossaball tour along the Atlantic coast in Argentina. For the realization of this event, Bossaball counted on the support of two brands. First, John Foos, a nationally recognized shoe brand and, second, Metabolic Cla, o food supplement company. The Bossaball tour gave the UAI the opportunity to present its program and studies to possible future students in a cool, young and energetic environment in the summer atmosphere on the coast of Argentina.

Bossaball as an educational offer in university spaces

Bossaball was introduced as an innovative university sports activity at the European University of Madrid in Spain, a private university affiliated to the Complutense University of Madrid and part of the “European Higher Education Area”. By the number of students it is the 1st private university in Spain. In 2008, due to its spectacularity and especially the huge skills that confer its practice, the EUM decided to go for this new discipline and incorporate it as a new sporting activity for three months at a very central site on the campus. The University of Antwerp, one of the most important in Belgium, has included Bossaball as part of its student offer within the framework of the second week of university sport during 2008 and 2009. During the second semester and after the development of the sports week, the university implemented a full week of super games and show sports, in which all students of the different faculties were able to participate in Bossaball clinics. During an university branding tour with Super Ricas in Colombia, Bossaball impacted the afternoons of universities in the Colombian capital Bogotá with the activation of the brands Super Ricas and Todo Rico, two snacks brands that occupy the first spots in the market in Colombia since more than 50 years. For the development of the activities in the universities, Bossaball Colombia implemented a pedagogical strategy, which included 3 stations: the Bossaball court, a volleyball / foot-volley station and a musical station. Each station was covered by a trainer specialized in its respective area. This dynamic allowed attendees to enter the sports disciplines and acquire in a short period of time the skills necessary for the practice of Bossaball.

Bossaball tournaments with participation of international and university teams in Kuwait

Within the framework of an official subject, two groups of students from the two Kuwaiti universities, the “Gulf University for Science and Technology” and the “American University of Kuwait”, set up an international tournament. In total, 4 teams participated: Brazil, Spain and one from each university.

The tournament was organized in collaboration with a Kuwaiti telecommunication company, Zain, which is represented in 8 countries in the Middle East. The success of the event created such an impact that the largest Kuwaiti newspaper, the “Kuwait Times”, placed Bossaball on its cover and published an article about the events of the event from which the Brazilian team came out as the winner.

Bossaball invited by the Ministry of Culture and Youth

In order to raise funds for a social cause in Singapore, Bossaball was part of the Jhororia Youth Carnival, promoted by the youth program of the Singapore Discovery Center and organized by the Institute of Technical Education College West (ITE College West). Games, performances and the finals of a paintball and Bossaball tournament and the Young Entrepreneurs Competition raised more than S$ 14,400 for various charities through registration fees and booth sales. Sentosa Beach is Singapore’s good-time island dedicated to fun! In July 2019 its beaches hosted a Bossaball tournament with the students sports club of the National University of Singapore. The tournament brought together first-year students with its seniors in a social and sportive setting on a fantastic beach location.